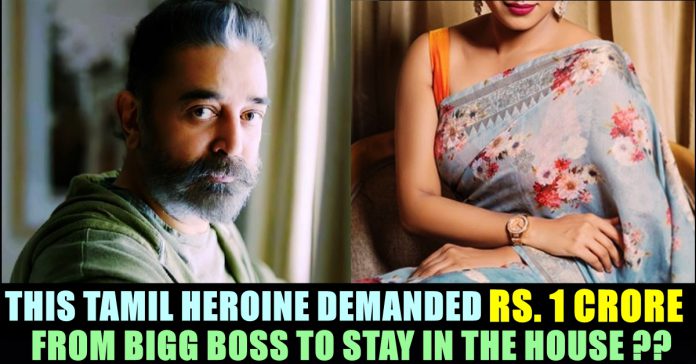 The most awaited fourth season of Bigg Boss show is all set to start from early October to entertain the TV audience of Tamil nadu. In the first promo which was released, had Ulaganayagan Kamal Haasan in salt and pepper hairdo associated with thick beard and handlebar mustache look. In the first promo, Kamal Haasan suggested people to start working by following the new norms and added that he is going to initiate it himself by starting to work for the fourth season of Bigg Boss.

Now, as the fourth season is approaching, speculations among audience regarding the participants is doing rounds in social media platforms. Sunaina, Ramya Pandiyan, Anchor Manimegalai, Model Sanam shetty are the top names that are being considered to be participated in the Bigg Boss.

Sanam Shetty denied the news by writing “no it’s just a rumour👍 I’m not going.”

Now, a recent update has said that actress Kiran Rathod has been almost confirmed to go into the Kamal Haasan hosting show as a contestant. She was acted with him in the film “Anbe Sivam”. Meanwhile, a recent has emerged saying that an actress has demanded Rs. 1 crore to participate in the show.

Shilpa Manjunath who is known for appearing in “Ispade Rajavum Idhaya raaniyum” with Harish kalyan, has been approached by the Bigg Boss management authorities, The actress reportedly asked Rs. 1 Crore to stay in the house for 100 straight days.

The Bangalore based actress, who completed her B.E degree in Electronics and Communication, was a debuted through Vijay Antony’s “Kaali”. Check out some of her recent Instagram posts below :

Comment your views on the Bigg Boss show getting streamed from October !!