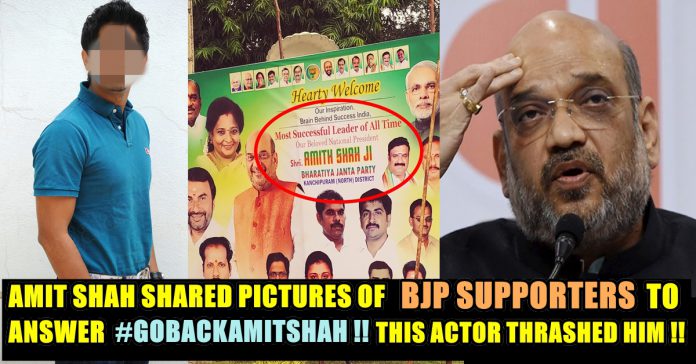 On the day that BJP President Amit Shah is scheduled to visit Chennai, pavements on some stretches near the airport and along the East Coast Road (ECR), were dug up to make way for party cutouts and banners. Amit Shah is in Chennai as part of the 2019 Lok Sabha Election Preparation Tour to Tamil Nadu and is scheduled to land in the city at 11.45am.He will then hold daylong meetings at the VGP Golden Beach Resorts on East Coast Road (ECR).

Photographs showed flags and banners that were dug into footpaths, damaging them while also blocking the way for pedestrians. The Madras High Court has imposed a ban on hoardings and flex boards featuring living persons.

Responding to the tweets, a BJP party worker told TNM, “Generally party workers don’t erect the hoardings, we give it to the contractors. So, they would have done it. But we will look into it and do a course correction if found true.”

Speaking to TNM about this violation by the BJP, Jayaram Venkatesan, the convenor of Arappor Iyakkam said, “I haven’t seen the images yet. But we will surely check on it and file complaints with the police and the corporation like we did for other political parties.” Illegal hoardings and banners have caused inconvenience to the public and even claimed lives. Between November 2017 and February 2018, at least three people were killed in separate incidents in Coimbatore, Ooty and Coonoor owing to hoardings.

Actor Siddharth who is a Pan Indian actor predominantly known for his works with Aamir Khan in Rang De Basanthi , Manirathnam’s Aayutha Ezhuthu, Director Shankar’s Boys is now currently working in an untitled film. He disturbed high time through one of the banner of Amit Shah it seems. He was last seen in his own production venture Aval. Apart from his film career actor Siddharth was also appreciated by Tamil people during the Chennai Flood for giving his hand in helping people. He never missed to raise his voice in important occasions in politics, be it International on Indian. Along with the people of Tamilnadu, Actor Siddharth also strongly opposed the arrival of Amit Shah to Tamilnadu. He even involved in arguments with the supporters of BJP yesterday. Amit Shah posted a photo of vast number of BJP supporters attending the meeting and wrote “Few pictures for those who were questioning BJP’s presence in Tamil Nadu.” The Actor who could not resist himself after seeing the post he straightaway replied to his tweet. Few pictures for those who were questioning BJP’s presence in Tamil Nadu. pic.twitter.com/bCdrNzYzSr

As the banner portraying Amit Shah as a “Most Successful Leader of All Time”, Siddharth  immediately spoke his heart out. Here’s the reply from him for the photos posted by “Amit Shah” :

“Most successful leader of All Time” “Brain behind success India” Who can question your presence (or you) anywhere? I like the pleasant knowing smile from @DrTamilisaiBJP ji. pic.twitter.com/bTpjA0xtoP

Day after posting this comment Siddharth also made sure that all the political parties except NOTA are offending with banners. He said “Political parties in #TamilNadu misuse banner, poster and flag privileges on a different level.#DMK #AIADMK and even smaller parties (NOTA, Independent) are all equal offenders. Maximum nuisance and damage.”.

Political parties in #TamilNadu misuse banner, poster and flag privileges on a different level.#DMK #AIADMK and even smaller parties (NOTA, Independent) are all equal offenders. Maximum nuisance and damage. https://t.co/inv2c8XP3r

What do you think on the Actor’s stand ?? Comment below !!