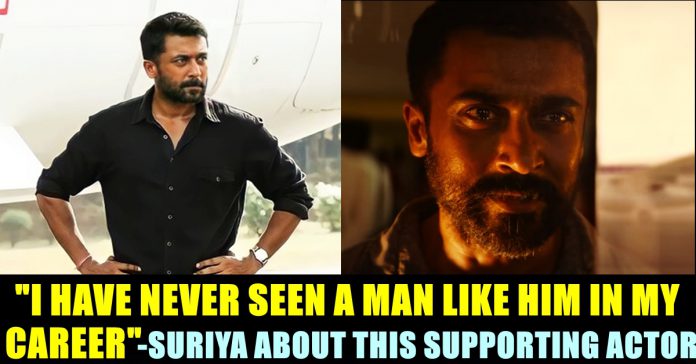 Director Sudha Kongara is busy participating in the promotional interviews for her film “Soorarai Pottru”. In a most recent interview, the filmmaker has revealed about an incident that took place in the shoot spot of “Soorarai Pottru”. She opened on how actor Suriya appreciated actor Kaali Venkat for the way he helped him to emote well in a scene.

Kaali Venkat is a popular supporting actor who acted in films such as “Thegidi”, “Maari”, “Irudhi Suttru” etc. He is widely known as a comedian among Tamil film audience but Sudha Kongara always used him for strong supporting roles. In “Irudhi Suttru”, Kaali acted as the father of “Mathi”, the female lead. In the interview, Sudha appreciated Kaali by saying that one should learn from him on how to act in a scene. Overwhelmed by her words, Kaali posted a tweet in his twitter handle, thanking her with his whole heart.

Directed by Sudha Kongara who stunned audience with her “Irudhi Chuttru”, the film “Soorarai Pottru” is bankrolled by Suriya himself under his 2D entertainments. Due to the corona outbreak, Suriya decided to release the movie directly on Amazon Prime. The film which is inspired from the life history of Air Deccan founder G.R Gopinath, is touted to be a coming of age biographical drama. It is notable that Gopinath is a retired Captain of the Indian Army, an author, and also a politician.

In this recent interaction with Cinema Vikatan, Sudha who shared about many aspects of the film, revealed about her casting process. She expressed her wish of having Kaali Venkat in her all films. “He is such a brilliant actor. The way he observes the nature of a character and adding his own touch to it, is something every actor should learn from him.” said Sudha who went on to share an incident that took place in Soorarai pottru shooting spot.

“While I was shooting a scene in which Suriya was supposed to talk in phone with Oorvashi mam, my assistant directors were giving cue for her voice and Suriya was reacting. Suriya’s acting at that time was brilliant but not brilliant enough. At that time Kaali venkat came there for another shooting and I called him” said Sudha.

“After reading the dialogues of Oorvashi mam’s dialogue, Kaali venkat said it with emotion to Suriya and he reacted well this time. After finishing the scene, Suriya just hugged him. He said that he never seen a man like Kaali venkat in his 25 years long cinema career. Because he uttered the page long dialogue of Oorvashi ma’m in Madurai accent with perfect emotion which helped Suriya to perform well” the filmmaker lauded Kaali Venkat in the interview.

On seeing these words from her, Kaali posted a tweet writing “thanks so much ma’am & @Suriya_offl sir love you soooooo much”

The tweet garnered huge response from the users of twitter. “Soorarai Pottru” is all set to stream in Amazon Prime from 12th of November. The trailer of the film released recently and raised the expectation among the fans.

Suriya Pottru is receiving a positive word of mouth from the common audience for its intense content and for the performance of its lead characters. G.R Gopinath, the real life “Maara”, appreciated the film for way it was depicted through a series of tweet. Read : Captain G.R Gopinath’s First Tweet After Watching “Soorarai Pottru” !!