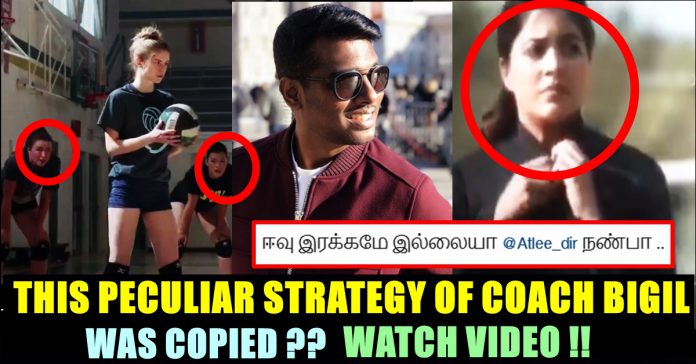 Users of social media once again came up with a video alleging that the strategy used by Coach Michael in Bigil movie to make his girls know about the importance of Teamwork was copied from a 2018 released Hollywood movie The Miracle season.

The film The Miracle season is based on the true story of the Iowa City West High School volleyball team after the sudden death of the team’s heart and leader, Caroline Found, in 2011. In the movie Bigil, When Michael (Vijay) returns to his team as coach, the members of it wouldn’t like him due to his past life. Vijay, to bring them under his control, would challenge them to win him in a football match. While playing with them, the protagonist, being a former state player, would win them effortlessly. After winning them, Michael would demand the girls to state the reason for their loss in the previous game to which the girls would blame each other.

To make them understand about the importance of Teamwork, Michael would ask every girl to score a goal by kicking the ball into few particular areas. If one girl misses to score a goal, as a punishment, every girl of the team should run for 10 straights as per the order of Michael. This would make the girls to realize the importance of having the back of their teammates.

This exact scene already took place in The Miracle season, video of which is going viral in social media platforms. As the movie is based on Volleyball game, the coach of the team would place a target for the girls and would demand every one of them to run for a long time even if any one of them misses.

Atlee, the director of this movie is arguably, one of the most loved and hated filmmaker of Tamil cinema right now. Being a former assistant of Shankar, Atlee’s way of presenting his films and the castings he choose for the characters are considered as his major qualities. All the three films of Atlee became blockbusters despite of the plagiarism controversies. However he is often criticized for replicating the movies of ace filmmaker Manirathnam.

What do you think on the similarities between both the scenes ?? Comment your views below !!

Gautham Menon Got Mercilessly Trolled Like Never Before For This Reason !! Check Out !!

Filmmaker Gautham Menon made a glorious debut in 2001 with Minnale, and since then, he has been tasting success after success with his eccentric...

Priya Bhavani Shankar trolled the regressive titles and thumbnails of small time youtube channels while replying to one of her Instagram followers. We have...

Actor Vijay’s Surprise Gift To Santhosh Narayanan On His Birthday !! : Unexpected From The Actor !!

Composer Santhosh Narayanan, who made his debut in Kollywood in 2012, has carved a niche for himself in a short span of time. In his...

Yuri Tolochko, a popular bodybuilder from Kazakhstan made headlines worldwide after marrying a sex doll with which he was having a relationship for past...