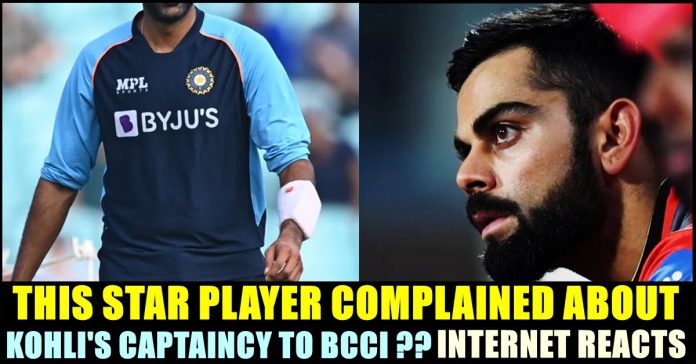 This Star Player Of Indian Team Complained About Kohli’s Captaincy ??

A number of shocking reports surfaced saying that India’s senior player Ravichandran Ashwin complained to the Board of control for cricket in India complained about Kohli’s captaincy. It is reported that Kohli accused Ashwin of showing “no intent” during the finals of the World Test Championship that took place in Southampton, England. It is notable that Kohli benched Ashwin in the recent test series that took place between India and England which caused a controversy as Ashwin is on of the top spinners in the world.

While we were thinking that it is the media and fans who are milking attention by buzzing about Virat stepping down from captaincy, the 32 year old released a press note recently announcing about the same. The Delhi born cricketer who score 70 centuries in International cricket so far, announced that he will be stepping down from captaincy in T 20 cricket post the world cup tournament. The cricketer said that he needs to give space to himself as he was captaining the team for the past 5,6 years in all the three formats.

“Understanding workload is a very important thing and considering my immense workload over the last 8-9 years playing all 3 formats and captaining regularly for last 5-6 years, I feel I need to give myself space to be fully ready to lead the Indian Team in Test and ODI Cricket. I have given everything to the Team during my time as T20 Captain and I will continue to do so for the T20 Team as a batsman moving forward.” Kohli said in his statement who went on announce his retirement as a captain from Royal Challengers Bangalore team from next year.

Despite of being one of the successful captains of team India, Kohli’s captaincy has always been a subject to criticism as the 32 year old is still struggling to get an ICC trophy. Reports suggests that BCCI had been planning to remove Kohli from the captaincy as they were unhappy with the cricketer not able to win a single ICC trophy. Reports emerged saying that the revolt against started within the team few months ago. Several senior players in the dressing room were miffed at the attitude of the ace cricketer.

According to IANS, Ravichandran Ashwin has been named as the senior player who complained to the BCCI about Virat Kohli’s captaincy. Ashwin reportedly complained against Kohli for making him feel “insecure” and for accusing him of “not showing intent” during the finals of World Test Championship against New Zealand.

It is notable that Kohli benched Ashwin throughout the England series, despite of the suggestions from experts on playing him at the spin conditions. Ravi Shashtri, chief coach of team India talked about playing Ashwin before the fourth test but the captain, reportedly ignored. Check out some of the social media reactions surfaced on the news :

Imagine if RCB get Ashwin next auction and make him captain and Ash rests Kohli for the lols. 😂

Is Kohli an idiot at first place who'll blame Ashwin for not showing intent in WTC final?

Nah, Ashwin can never do that. He has been very vocal about Kohli's positives as a skipper.

Anyway, assuming he's really pissed off with his exclusions, or say he dislikes Kohli's attitude, yet he would never step down to such an extent. He is a gentleman.

So Ashwin won't play a single game in T20 WC and his test career is also over !

Previous articleVideo Of A Youth Threatening A Cop Inside Police Station Created Outrage !! WATCH
Next article“There Is No Tamil Language Without Hindu Religion” – H. Raja While Promoting “Ruthra Thaandavam”

WOW : Dhoni Reveals His First Crush !! : Even Sakshi Doesn’t Know About It All These Days !!

MS Dhoni can easily be called the most successful Indian skipper that Indian cricket team has ever had. Under his leadership, the Indian team...

Hundreds of protesters took to streets blocking roads, burning tyres and shouting slogans in Assam as life across most parts of the northeast was...