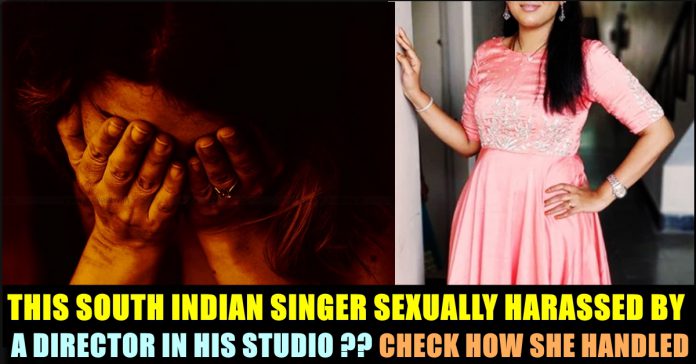 Ever since Tollywood actress Sri Reddy went topless outside the Telugu Film Chamber of Commerce to protest against the casting couch in the industry, several actresses have opened up about their casting couch experiences.

Famous choreographer Raghu master’s wife, singer Pranavi Acharya, who came into limelight for her songs in Sri Ramadasu, Happy Days, Yamadonga, and Lion, is the latest celebrity to speak out about casting couch.

In an interview when Pranavi was asked about her thoughts on casting couch she replied that she was also asked for sexual favours. She said that one time the makers demanded sexual favours in order to give chances for her to sing in the films in the initial phase of her career but she strongly rejected the offer and said no.

According to Indiaglitz, The singer revealed that once she was invited by a director to his studio and forced her to have sex with him in order to sing in his movie. Even after refusing, the director continued to force Pranavi in the same way which resulted in Pranavi warning him of slapping with a slipper. This revelation by the singer has become a sensation. She also revealed that she never regretted to take a stand and warned him strongly.

Pranavi Married The Choreographer, Master Raghu In 2016 And Have Blessed With One Girl . Raghu Master Who Got His First Opportunity Through The Dance Show Dhee And Popular With His Moves In Arya 2, Mirchi, Jil, And Akhil.

Last year in the month of April, Telugu actress Sri Reddy went topless outside the Telugu Film Chamber of Commerce to protest against the casting couch in the entertainment industry. After this act, number of actresses, supporting artists have come forward to reveal their sexual harassment story. Starting from Pawan kalyan, Sri Reddy accused even director A.R Murugadoss, Sachin tendulkar,  and even Actor Raghava Lawrence.

What do you think on this series of sexual allegations in South Indian film industry ?? Comment your views below !!

Previous articleKuldeep Yadav Getting Brutally Trolled For His Hypocritical Statements About Dhoni !! Check Out !!
Next articleBIG BREAKING NEWS : The First Ever Promo Of BIGG BOSS Released !! Check OUT !!

Freedom is what you do with what is done to you. The most-awaited Aadai teaser begins with this quote of philosopher Jean-Paul Sartre, hinting...

Tamil Actors Got Criticized For Not Casting Their Votes !!

Tamil cinema celebrities including Superstar Rajinikanth getting criticized for not casting their votes in the local body elections that took place on 19th of...