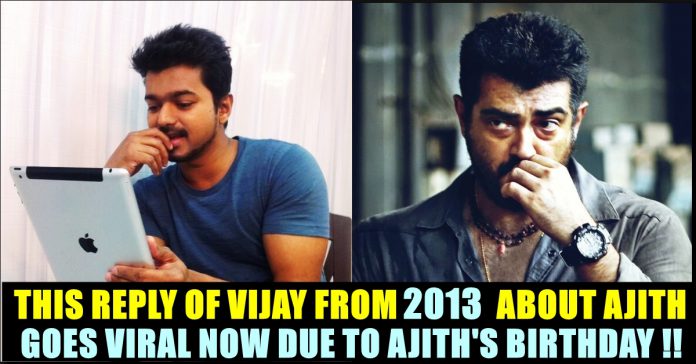 This Reply From Actor Vijay About Ajith Kumar From 2013 Goes Viral Now !! Check Out !! Both the actors are praised for their respective skills and has separate fan base as we all know. Ajith who is known for his screen presence would set the screen on fire making his entry in his films. Meanwhile Actor Vijay known for his exceptional dancing skill. 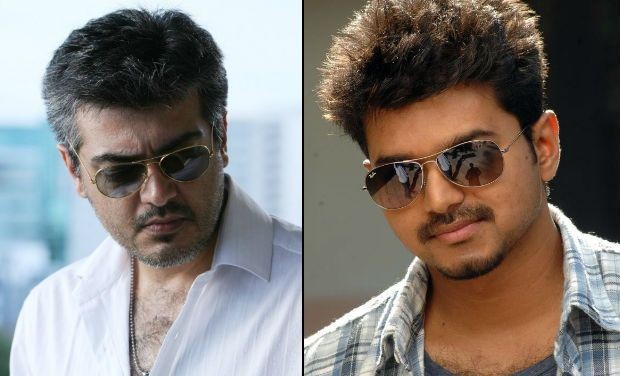 Ajith KUmar’s fans celebrated the 48th birthday of the actor a couple of days ago. Many celebrities wished the actor for Ajith’s birthday along with the fans. Here’s How These Kollywood Celebrities Wished Ajith Kumar On His Birthday !! Must Check !! Along with the wishes, many vintage videos of Ajith’s interviews and movie scenes did rounds in social media. Even television channels telecasted Ajithkumar’s movies on the special occasion.

To our surprise, a old tweet of actor Vijay about his dear friend and his long time viral also surfaced. The tweet was posted by actor Vijay when he conducted a chat session with his fans in the year 2013, June. The actor posted about Ajith when we was asked by one of a twitter user.

The fan in his question asked “wat s your opnion abt #Thala ajith ?”

To This Vijay politely replied by saying that Ajith is a beautiful hero. The answer from the actor read as “azhagana hero…”

This tweet from Vijay 6 years ago is still getting replies and retweets from the fans of Tamilnadu. This evidently shows the craziness of the fans for both the actors. Ajith Kumar was last seen in Viswasam which was a blockbuster and is currently acting in the remake of “Pink” which is named as “Nerkonda Parvai” where as Actor Vijay busy in shooting for the Atlee directorial which is tentatively titled as “Thalapathy 63”. Both the films are expected to be released in this year.

What do you think on this reply from Vijay about Ajith ?? Comment your views below !!

Followed by Retired Indian Airforce agents shared a clip from "Beast" movie and questioned about it's logic, fans from Tamil film industry started their...