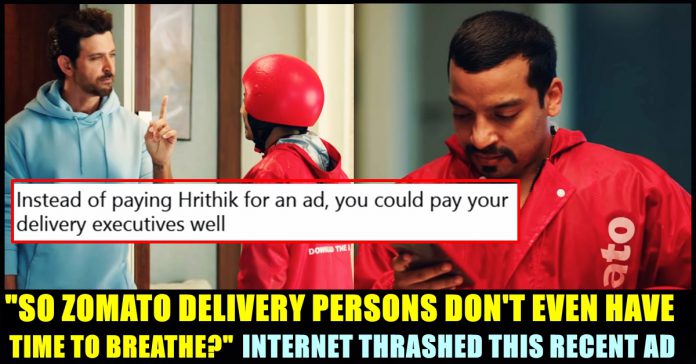 Zomato Food Delivery App’s recent advertisement starring Bollywood Super Star Hrithik Roshan faced the heat of social media, due to the concept the short video carried. It showed the delivery partner of the food delivering app leaving Hrithik Roshan’s house even without waiting for the actor to get his cell phone to pose for a selfie with him.

The advertisement showed that the employees of Zomato are very sincere that they don’t even wait to pose for a picture with a celebrity like Hrithik Roshan as they constantly have orders to deliver on time. The video sparked huge outrage in twitter with an enormous number of fans questioning Zomato whether they are accepting that their employees are restricted to relax during their work hours.

Many others suggested the management of Zomato to take care of the employees wo are working, even in bad weather conditions instead of investing in Bollywood celebrities. An advertisement of Zomato having Katrina Kaif as the main cast also got released recently. The ad which became a subject to controversy shows a delivery executive braving the rain to drop a parcel at actor Hrithik Roshan’s place.

Calling him as “Jadoo”, Hrithik praises the delivery executives of Zomato for working in all the weather conditions. As a sign of a friend gesture, Hrithik offers a selfie with the delivery executive and goes inside his home to get his phone. In the mean time, the delivery person receives a notification in his phone which is about the location of the next order. Instead of waiting for Hrithik Roshan to come, the Zomato guy leaves the place to make sure that he delivers his next parcel on time.

The ad didn’t go well with many of the online users who came up with reactions suggesting the app to take good care of the employees instead of paying hefty amount for the top-tier celebrities. Some of them also asked whether the online app is accepting that it is not letting their employees to have time to relax during their work time.

So wait.
1. Zomato is admitting they overwork their riders so much that they don't have a minute btwn deliveries?
2. Which Zomato rider is *that* happy to ride in the rain to make deliveries?
3. Shouldn't the rider have been tipped, instead of a "selfie" for doing his job well? https://t.co/RpdXOj8yJZ

Instead of paying Hrithik for an ad, you could pay your delivery executives well

Great message that the guy needs to not even get 10 seconds to take a selfie just to make ends meet and instead of tip he gets you calling him a deformed alien, what a great moment for both of you

Aren't you ashamed of glorifying exploitation and lack of basic human rights like this?

Yaar just pay your delivery partner fair wages and get them to send you a 10s video on what they think. It’ll be more powerful than having to send idlis to Shahrukh Khan or whatever other ad you have lined up https://t.co/ta5qVFopXm

"our delivery guys have to make deliveries so fast, they basically need to teleport" https://t.co/3hfAJuWRSy

Are you kidding me with this ad? They’re not even trying to hide the capitalist exploitation propaganda.

Overwork and underpay your employees, and glorify their helplessness with trash like this. https://t.co/ghOhTnmbzC

++this has the same ring to it as M0di's comment on sanitation workers.

In both the cases it reinforces the thought that they are supposed to do a selfless work. In other words, get exploited.

so you are just proving the point that Zomato delivery persons don't even have the time to breathe because of how overworked they are? https://t.co/HBbKLFMiro

Okay so someone proposed this concept, they made this ad, someone edited it and submitted it etc etc and NOBODY noticed it's bragging about exploiting employees? https://t.co/s2j80xOcSN

Stop making these cringe videos. The Katrina one is equally pathetic! You are just proving that you have no regards for the emotions of your employees, and they can't even afford to take a few minutes off for themselves. https://t.co/wApY3AH715

Watch the advertisement of Zomato which features Katrina Kaif :

Previous articleMan Gets Rejected & Starts Ordering Pizza To Revenge The Woman!!
Next articleJarvo Disguised As Indian Batsman & Entered Field After Rohit !! Gets To Trend In Internet

“We Found Him Sitting On The Top With His Wife’s Dead Body” Says Rescue Officer !!

As their bus surged forward in the flood waters that still inundated National Highway 47, people standing on top of buildings on either side...