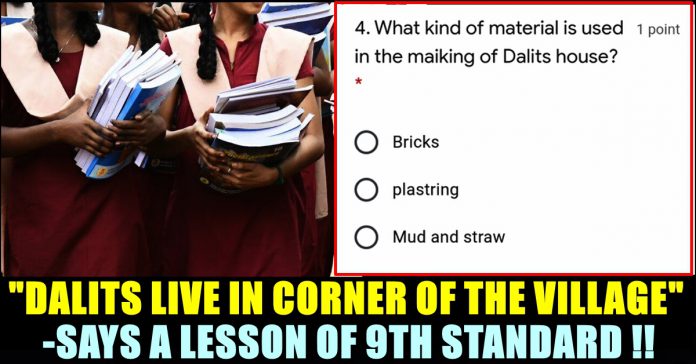 This Question Asked To A 9th Standard Student Sparks Outrage !!

In a shocking complaint made by a mother of a 9th standard girl student, an online exam question paper asked her daughter a question based on which kind of material is used to build a house of people belong to scheduled caste. The mother who says that it is a question paper made in a school located in Assam for its students, also posted a picture of the lesson from which the question was obtained. The post she shared went viral and grabbed the attention of Tamil filmmaker Naveen who shared it in his official twitter account, questioning against the casteist venom injected into the brains of young students.

Despite of several movements and protests against the existence of caste discrimination in India, this activity of the school organisation or the book author who is effortlessly trying to teach the young minds about how Dalits are being treated in rural areas of the country even today, clearly proves that they don’t want it to end. Romanticizing caste discrimination in the name of teaching students the reality of the society, is highly condemnable which majority number of Internet users are doing now.

“What kind of material is used in the making of Dalits house” the question read and the options given are “Bricks, Plastring, Mud and Straw” Here’s the screenshot of the question asked in the examination :

According to the particular lesson took place in the book, the correct answer for this question is “Mud and Straw”. When one of a twitter user said that it could be a photoshopped picture made to create controversy, the mother who posted it said that the question took place in her daughter’s online test.

To another user who didn’t believe her, Sridevi said that she is living in Assam and it was asked in her daughter’s test.

We are in Assam… Yesterday they conducted online class test… This has been asked in that test. pic.twitter.com/GYw13jruf0

“The story of Village Palampur” is the lesson which teaches teens about how caste system is working in country India. The lesson says that Palampur village which contains 450 families, contains 80 upper caste families. It says that they own majority land of the village and their houses are made of brick with cement plastering. “The SCs comprise one third of the population and live in one corner of the village and in much smaller houses. “Some of their houses are made of mud and straw” the portion reads.

Regarding the spelling mistakes took place in the question paper and in the lesson, mother said “It seems that their capacity in English language is low”.

Sharing the screenshot, Director Naveen who is known for making the movie “Moodar Koodam” said that these kind of questions will inject Casteist venom in the system of students without their own knowledge. keeping mum when our fellow human being is facing injustice is also a kind of violence” his tweet read.

Comment your views on these kind of lessons being taught to the younger generation !!

Previous articlePeriyar Statue Disrespected In Coimbatore !! One Surrendered
Next articleRacer Alisha Slammed Reporter For Gossiping About Her !!