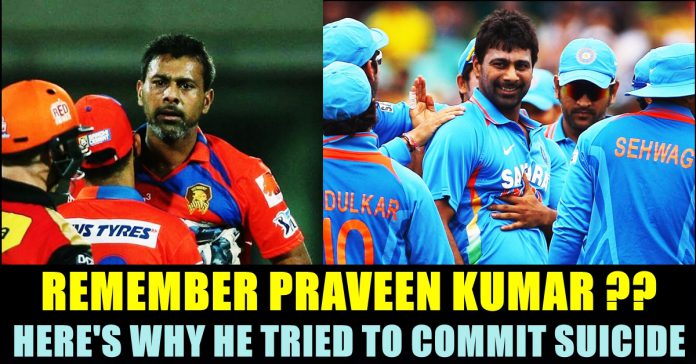 Praveen Kumar is one of the most important pacer of his time. His performance for team India during his prime time is exceptional and the cricketer is currently aiming to involve in the game in various ways such as coaching an IPL team etc. In a recent interview with Indian Express, Praveen has revealed that he tried to end his life.

Praveen Kumar is a former Indian cricketer who bowled right-hand medium-pace. In first-class cricket, he played for Uttar Pradesh cricket team. He relied on his ability to swing the ball both ways along with line and length. In October 2018, he announced his retirement from all forms of cricket. The cricketer has played 68 One Day Internationals, 6 Test Matches and 10 T20 games for the national side. He also represented a number of teams in the Indian Premiere League.

To our shock, the cricketer has revealed that he wanted to commit suicide with his revolver ina highway to Haridwar but he decided not to go ahead with it after seeing a photograph of his children inside his car. “I told myself, “What’s all this? Let me just end it” Praveen Kumar said in his interaction with Indian express “I realised I can’t do this to my innocent children, put them through this hell. I turned back,” he added.

Praveen Kumar, in the interview worried about the fact that mental issues are not considered as one in India. “Who understands depression in India? Nobody knows about it and in Meerut, certainly not. I had no one to talk to, felt almost constant irritation. As a fast bowler, I had to do a lot of thinking to take wickets. I told the counsellor I was unable to switch off thoughts,” Praveen Kumar explained it in the interview.

“I had been bowling so well. In England, everybody praised me. I was dreaming about a Test career. Suddenly, it was all gone. I got the feeling everybody thought Praveen Kumar was retired, not free. Does no one know the Uttar Pradesh Ranji team doesn’t have a bowling coach? I should be with the team and not be sitting here in Meerut,” Praveen Kumar said.

Praveen Kumar married Sapna Choudhary in 2010, she is a national-level Shooting sport player. He owns a farmhouse in Barnava village and Praveen Restaurant and Wedding Banquet in Meerut on NH-58 Rohta Road Crossing. It is notable that he entered politics by joining Samajwadi Party prior to the UP assembly elections.

#JusticeForKajal Trending On Internet After A Teenage Girl Died!

On Twitter, the hashtag #JusticeForKajal has been trending. Many people have been extending their support to get justice for the teenager. People have...