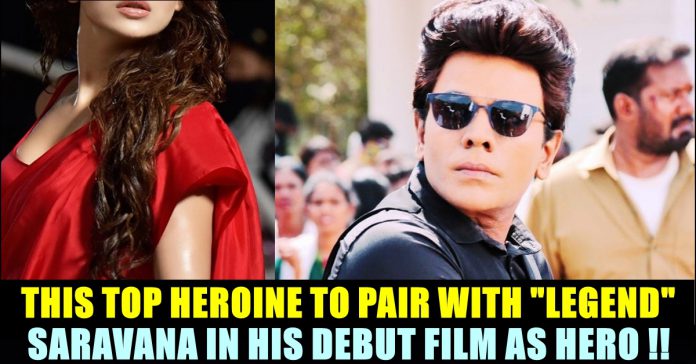 Days ago, shooting spot pictures of the upcoming film starring Saravanan Arul of Saravana stores surfaced in the Internet with various kind of reactions from the fans. Now, details on the leading lady of the project was officially announced by the makers. The film which is reportedly being made of a huge budget of Rs. 200 crores, is going to release in five languages across India.

Selvarathinam’s son Saravanan Arul who controls different shops of Saravana Stores is now all set to make his entry into Tamil film industry, not as a producer but as an actor, infact as a hero. Saravana Arul who uses “Selvarathinam” logo for the stores under his control has appeared in several advertisements of his own shops.

He rose to fame among the people of Tamilnadu through the Tamil meme nation. His presence in the advertisements of “Saravana stores”, along with top heroines of the industry including Tamannah, Hansika, Shreya made him viral and resulted in himself featuring in many photo memes and video memes across the social media platforms. He also made almost all the TV actors to feature in one of his advertisements for Saravana stores.

Recently, it was announced that the business man’s entry into Kollywood film industry as a protagonist was confirmed. He reportedly impressed by the story narrated by director duo, JD – Jerry (Joseph D Sami and Gerald) and given nod to act in the film. The film which was planned to release in the year 2020, got postponed due to COVID 19 outbreak.

It was also reported that some of the top heroines are approached to pair up with Saravanan in the movie and now it has been confirmed that Bollywood actress Urvashi Rautela is going to pair with him in the multilingual.

In 2018, she appeared in the revenge drama Hate Story 4. She was named as the Youngest Most Beautiful Woman In The Universe 2018 by the government and tourism of Andaman & Nicobar Islands and won the Uttrakhand Maharatna Award from the chief minister of Uttrakhand.

Comment your views on “Legend” Saravanan pairing up with Urvashi Rautela !!

Previous articleVideo Of Samantha & Sathguru Triggered Internet !!
Next article“This One Is For You Vijay” Genelia’s Sweet Surprise Won The Hearts Of Vijay Fans !!

COURTESY : BUZZFEED 1You have nearly gotten into a fist fight with an auto guy over the rate 2You have wished horrible things on some auto...

A video that shows a Airport guard kicking the fans of actor Vikram has created outrage in social media platforms. Online users who saw...