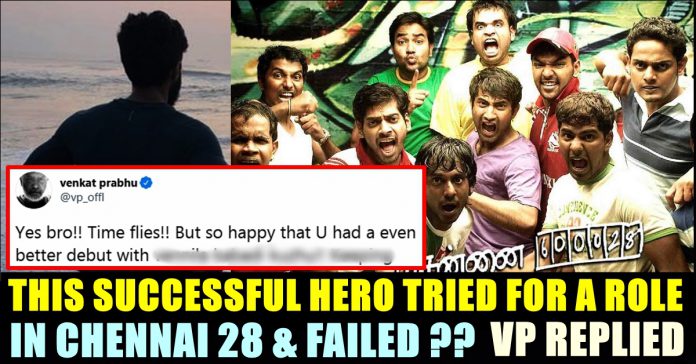 Director Venkat Prabhu thanked producer of his first film singer Charan on Sunday as the day marked the 13 years of his debut film, Chennai 600028. Th film which broke the stereotypes of Tamil cinema, acted as a break to everyone involved in the film. Chennai 600028 is a debut film for almost everyone except Yuvan Shankar Raja who composed music for the film. The film revolves around a group of youngsters trying to prove themselves in a game they love by surpassing various emotions such as love, betrayal, revenge etc.

The film completed 100 days of theatrical run and had a sequel years later. The film cast includes actors Jai, Mirchi Shiva, Prem Ji, Sampath, Nithin sathya, Vijaya lakshmi, Aravind Akash and many more. Most of them have reached heights in the industry today and Venkat Prabhu went on to direct top actors of Tamil film industry such as Ajith, Suriya, Karthi etc. In a way of expressing his gratitude, VP, in his twitter post wrote “Wow 13 years!!! #chennai28 thanks to one and all for the love for the movie and for us!! Owe u Charan na!!” in his post by uploading a picture of a Jersey.

Wow 13 years!!! #chennai28 thanks to one and all for the love for the movie and for us!! Owe u @charanproducer na!! 🤗 pic.twitter.com/Acqko3DYZE

To our surprise, actor Vishnu Vishal who is known for providing quality movies to Tamil film audience, posted a reply revealing that he gave a try to act in the film 14 years ago. He couldn’t believe that almost 14 years have gone since he met Venkat Prabhu for the first time to get an opportunity to act in the film. “Sar unbelievable…its been almost 14 years when i met you first for an opportunity in #chennai28… Time flies🤗 Wil always be a special film for tamil audiences…” he wrote in his tweet.

Sar unbelievable…its been almost 14 years when i met you first for an opportunity in #chennai28…
Time flies🤗
Wil always be a special film for tamil audiences… https://t.co/L1e6apVwf5

However, Vishnu managed to debut through a sports film “Vennila Kabadi Kuzhu”. Being a cricket aspirant since his childhood, Vishnu went on to portray a struggling cricketer in “Jeeva” which became a hit. On seeing this tweet from Vishnu, Venkat Prabhu said that he is so happy that Vishnu had a better debut with Vennila Kabadi Kuzhu. “Yes bro!! Time flies!! But so happy that U had a even better debut with vennila kabadi kuzhu!! Keeping rocking!!!”

Yes bro!! Time flies!! But so happy that U had a even better debut with vennila kabadi kuzhu!! Keeping rocking!!! https://t.co/CclKmBIcAl

Though many followers of both of them questioned why Vishnu didn’t get to play a role in Chennai 28, neither of them replied. Few even requested Venkat PRabhu to cast Vishnu in the third part of the sports drama.

Nothing can dim the light that shines from within
– Maya angelou pic.twitter.com/dTj1SAJvQ9

Comment your views on Vishnu playing a role in the evergreen Chennai 28 !!