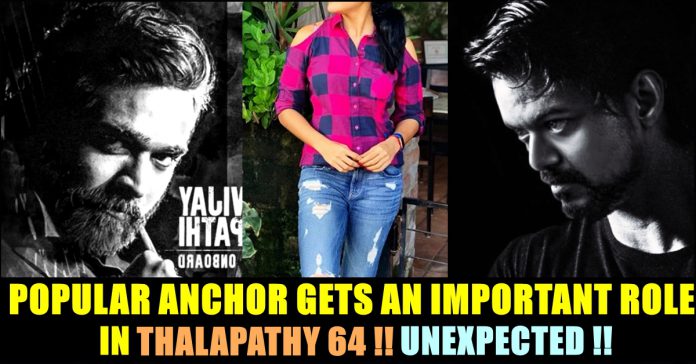 Thalapathy 64 has commenced with a customary pooja in Chennai with Vijay, Vijay Sethupathi, Malavika Mohanan and Shanthanu Bhagyaraj and the rest of the crew in attendance. Directed by Lokesh Kanagaraj, the film is touted to be a gangster flick with Vijay Sethupathi playing the villain. The film also has “Angamaly Diaries” fame Antony Varghese. Later the makers added Andrea Jeremiah in the cast crew.

Lokesh Kanagaraj who is considered as one of the new age filmmakers is keen on selecting young talents as his crew for this film it seems. Music to be composed by Anirudh Ravichander, the film is bankrolled by Xavier Britto of XB Film Creators.

Now to our surprise, popular anchor who recently hosted the audio launch of Thalapathy Vijay’s Bigil, Anchor Ramya has joined the casting and what’s more surprising is that she playing an important role in the film. Announcing it in her official twitter account, Ramya wrote ‘These are Life’s too good to be true moments ❤️’! So grateful to join hands with the ‘hot and happening’ @Dir_Lokesh & our very own THALAPATHY🙏🏻🤩.”

‘These are Life’s too good to be true moments ❤️’!
So grateful to join hands with the ‘hot and happening’ @Dir_Lokesh & our very own THALAPATHY🙏🏻🤩.
Thank you team @Jagadishbliss @XBFilmCreators @Lalit_SevenScr for your gracious welcome ❤️😇! #Thalapathy64 #FromFanGirltoCoActor pic.twitter.com/JcMVaigHkr

On seeing this announcement, fans of the actor excited and started expressing their emotions through tweets. Here’s how Ramya replied to them :

Speaking to the daily, she said, “Yes, I am a part of the film. It is an important role and that’s all I am allowed to say now. I have been shooting in Delhi for more than 20 days.”

Ramya feels that her life has become a full circle now. “I have been a fangirl since forever. Being a fan, hosting his audio launches, and now, to be sharing screen space with him makes the circle complete. I am really thrilled to be a part of this film,” she revealed.

Opening up about her role, she added, “I consider myself lucky as I get to work with big actors and technicians. I’ve seen Lokesh’s Maanagaram and Kaithi. I was completely blown away by his craft. He’s a talented young filmmaker and I am glad that I got a full-fledged role in this film.”

What do you think on Ramya making it to the big screen through a Thalapathy film ?? Comment your views !!

Dreamed As A 8 Year Old Boy, Made It Real At His 88 !! This Indian Farmer Bought A Mercedes-Benz !!

Almost all great forms of technology in the world exist due to a dream someone had at some point in time and it's this...

After Taking A Stunning Catch & 2 Wickets, Pandya Returned To Social Media !! Check Out The Reactions !!

After an impressive return to cricket on Monday in the third ODI against New Zealand, Indian captain Virat Kohli reckoned that all-rounder Hardik Pandya...