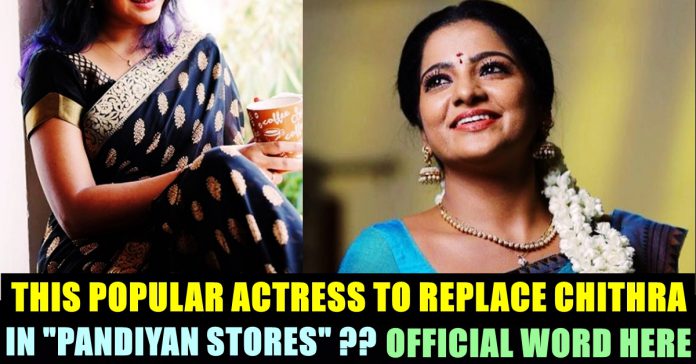 The demise of young actress Chithra shook the entire Tamil television industry and its audience. Chennai Police have concluded that the death was caused by suicide. However, relatives of Chithra have alleged that there is a possibility of physical violence. “We are making further inquiries into the case” Police officers said to media. The actress’s body was cremated on Thursday at the Besant Nagar crematorium in Chennai.

Several questions about the demise of VJ Chithra has been raising since the news surfaced. After the picture of her body surfaced, bruises were found in her face which made public to doubt the cause of her death. Chithra was found hanging in the hotel room’s bathroom during the wee hours of Wednesday.

Chithra was seen very much enthusiastic hours before her demise according to her colleagues which left the public to speculate mysterious possibilities. The “Pandiyan Stores” actress was in EVP film city hours before her death to complete her part in the shooting for Star music. Chithra also shared pictures and videos in her official Instagram account where she enjoyed 15 lakh plus followers, hours before her death.

The latest report had suggested that Hemnath, fiance of Chithra is being investigated by the Police for three consecutive days. Her colleagues of “Pandiyan Stores” serial which includes Venkat Ranganathan, Hema Rajkumar, Saravanan, Vikram are also going to be inquired by the Police, according to reports.

Meanwhile, speculations on the replacement of Chithra’s “Mullai” role in “Pandiyan stores” is also doing rounds in social media platforms. Many reports emerged saying that Sharanya Turadi who is known for acting in “Ayuzha Ezhuthu” and “Nenjam Marappathillai” is going to replace Chithra’s role in “Pandiyan Stores”.

Sharanya is a dearest friend of Chithra and it was Sharanya’s story which Chithra shared in her Instagram account before leaving the world. After Chithra’s demise, Sharanya who couldn’t bear the pain, said that she didn’t expect this to happen and shared her emotions through her social media platforms.

Now, on seeing these speculations of herself replacing “Chithra” in Pandiyan stores, uploaded a story in her official Instagram account, clarifying about it. The actress believed that no one can replace the role that Chithra played and confirmed that she is not going to act in that role. Sharanya also lauded Chithra for earning her recognition as Mullai with her impeccable performance and said that it will be remembered forever.

“There’s a news going around that I am replacing Chithra as Mullai in Pandiyan stores. That it not true. I don’t believe in replacing Mullai. She earned her recognition as Mullai with her impeccable performance which would be remembered forever. I respect that and I would rather let it be” read the story of Sharanya.

Check out the screen shot of her story here :

Since the demise of Chithra, Sharanya has been sharing the videos and pictures of them together. In an interview she gave to a popular youtube channel, Sharanya said that Chithra is a person who would always look happy. “She would always ask me to take pictures of her if she wears a good attire. But on that day, she completed two shows but didn’t share a single picture in her Instagram” she said.

Check out a recent post Sharanya uploaded in which she could be seen spending time with Chithra :

Previous articleFrom Mahesh Babu To Narendra Modi, Entire India Wished Superstar For His Birthday !!
Next articleJUST IN : First Eviction Of This Week Leaked !!

Suriya’s Responds To All The Memes & Celebrations That Surfaced For “The Rolex” !!

Suriya responded to all the memes and posts that surfaced celebrating the cameo he played for the film "Vikram" directed by Lokesh Kanagaraj. The...