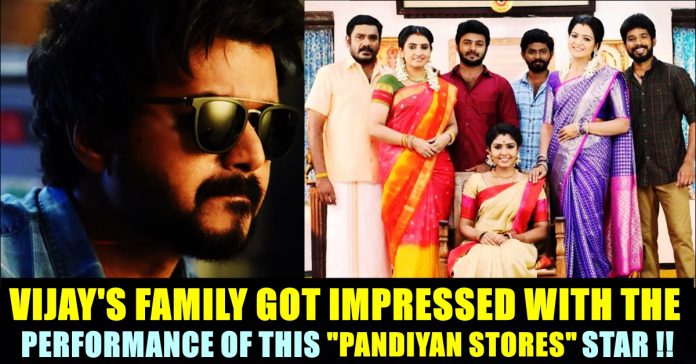 “Pandian stores” is a mega serial being telecasted in Vijay Television on weekdays. The half an hour program which focuses on a joint family of three brothers and their grocery store “Pandiyan Stores”, attracted family audience with its content. Stalin Muthu, Venkat Renganathan and Kumaran Thangarajan are playing the three brothers in the serial whereas Sujithra, VJ Chithu and Hema Rajkumar are playing the roles of their respective wives.

Now, to our surprise, one of the leads of “Pandiyan stores” had attracted the family of actor Vijay, an actor who enjoys huge fan base in Tamil nadu. Venkat who plays Jeevanantham in the serial, got the recommendation of Vijay’s mother Shoba for a film which is going to be directed by S.A Chandrasekar, senior filmmaker and father of actor Vijay.

S.A Chandrasekar is one of the very few experienced filmmaker in Tamil film industry who are currently working. In his 40 year long career, Chandrasekar made many impactful movies and mainly introduced his son Vijay who is one of the leading actors of South India right now.

The director who made 70 movies throughout his career, introduced Vijay in Naalaya Theerpu in the year 1993. Some of his notable movies are Sattam Oru Iruttarai, Naan Sivappu Manithan, Nenjirukkum Varai etc. He recently made a movie titled as “Capmari” by having actor Jai in the lead. The film marked the filmmaker’s 70th movie and had Athulyaa, Vaibhavi in supporting roles. India’s pride, Director Shankar assisted S.A.C before directing movies.

Now, Venkat has revealed that he is going to play lead in the filmmaker’s upcoming film upon Shoba Chandrasekhar’s recommendation. She who is an ardent follower of the “Pandiyan stores” serial, got impressed with the performance of Venkat and asked her husband to check him out. As a result of it, Venkat received call from SAC and met him in his office.

“Sir was in search of Lead for his new project and She recommended me as she is a “GREAT FOLLOWER” of Pandian stores. She Only Recommended To Sir Checkout This Guy “JEEVA” For Ur New Project.” Venkat wrote in his Instagram post. The actor also informed us that it all happened prior COVID 19 lockdown.

He who said that he will be grateful for Shoba Chandrasekhar all his life, expressed his disappointment over the COVID 19 virus for playing spoil sport in his acting career. “Whatever this is my lifetime happiness to meet Sir and talk in person.” he said and hoped that it will happen again.

READ FULLY 😞 . . “Legendary Director” Lifetime honour! Feeling so honoured for this. I was so excited after receiving a call from S.A. C Sir office. My heart jumped like a puppy. How could I control my excitement? Got to meet Sir only because of Shoba Mam. Sir was in search of Lead for his new project and She recommended me as she is a “GREAT FOLLOWER” of Pandian stores. She Only Recommended To Sir Checkout This Guy “JEEVA” For Ur New Project. 😍🥰 That happiness makes you crazy when you hear such words from the legends. I will be so grateful to her forever Thank you so much Mam. But It All Happend Before Lockdown Because of this Corona 😞 Lockdown happened then what to say! Corona Elar Life laium Senju Vitu tu Pona Mathri My Life Too, Whatever this is my lifetime happiness to meet Sir and talk in person.மீண்டும் இது போல் சந்தர்ப்பங்கள் நல் விஷயங்கள் நடக்கும் என்ற நம்பிக்கையுடன் 😎👍🏻☺️. 𝗟𝗢𝗩𝗘 𝗨𝗿 𝗦𝗶𝗺𝗽𝗹𝗶𝗰𝗶𝘁𝘆 𝗦𝗶𝗿 🙏. Ithe Mathri “❤️THALAPATHY❤️” a One Day Pakanum.. @ajuvenkat

Venkat has played a role in director Cheran’s “Thirumanam” and is currently busy working on the Vijay TV serial. Let us congratulate the young actor for his project with the veteran filmmaker as protagonist !!

Previous articleChahal Tried To Pull The Legs Of Kohli In Public !! Here’s How Kohli Gave Him Back
Next articleVijay’s “Vaathi Coming” Song Played In BIGG BOSS 4 !! WATCH

“Why No Celebrity Raised Voice Now ?” Actress Questioned On The Pocso Arrests

Actress Kasthuri questioned why no celebrity raised voice on the recent POCSO arrests as they did for the PSBB issue. She who thanked police...