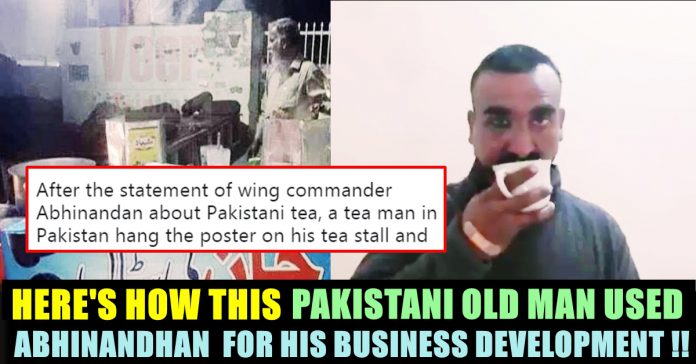 Indian Air Force pilot Wing Commander Abhinandan’s heroics have not only made him an icon in India but also in Pakistan where he’s being presented as a friend. A photo of a Pakistani tea stall with Wing Commander Abhinandan Varthaman’s image on its banner has gone viral. What’s interesting is that on the banner, Abhinandan can be seen sipping tea in a bold and confident manner with an Urdu text at the bottom that says, “Aisi chai ki dushman ko bhi dost banaye” which means Tea so fine that it can make a friend out of a foe.

An elderly Karachi tea seller tried to give his business a boost by using a picture of IAF pilot Abhinandan Varthaman’s in a banner on his stall. The banner also had a line which said that tea can bring people together, and even turn foes into friends. 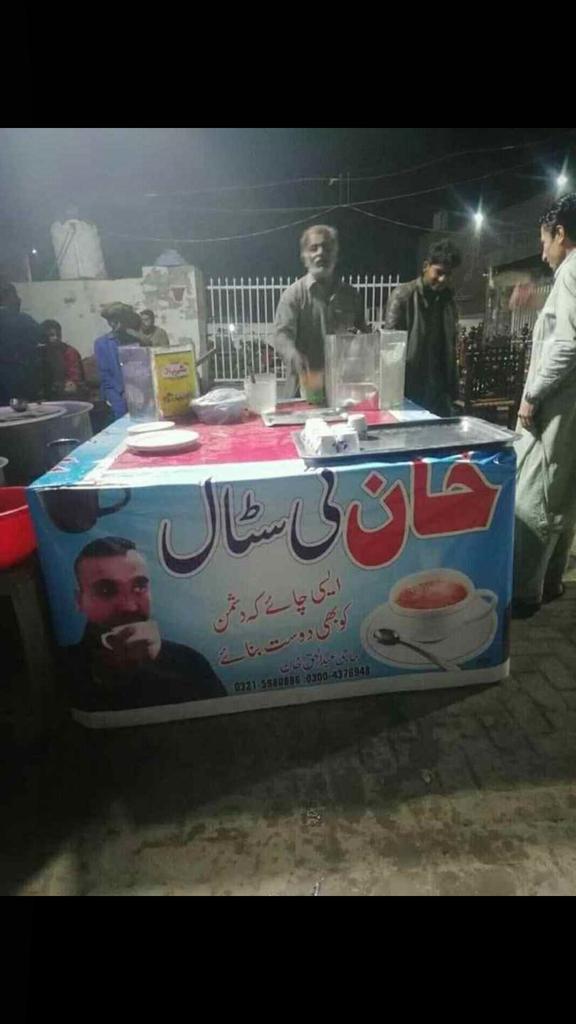 Wing Commander Varthaman was chasing Pakistani jets with a MiG -21 Bison fighter plane in Jammu and Kashmir on February 27 and crossed over to Pakistan-occupied Kashmir (PoK) where his aircraft was shot down during the fierce dogfight. He ejected safely and was taken into custody by the Pakistan Army when his parachute drifted and fell inside the PoK. He was released on March 1 after Pakistan Prime Minister Imran Khan on February 28 announced to release him as “a peace gesture.”

The photo was shared by a Twitter user named Wajahat Kazmi with a caption “This Pakistani uncle has got some serious marketing skills. The small roadside tea stall has a banner with the following text: ‘Khan’s Tea Stall – A tea that makes foes turn into friends’ with the image of Indian Air Force pilot #Abhinandan – #IAF”

This Pakistani uncle has got some serious marketing skills. The small roadside tea stall has a banner with the following text: ‘Khan’s Tea Stall – A tea that makes foes turn into friends’ with the image of Indian Air Force pilot #Abhinandan – #IAF pic.twitter.com/ldQVG6brI7

Wing Commander Abhinandan returned to India after spending at least 60 hours in Pakistan’s captivity after his Mig-21 Bison crash-landed across the Line of Control (LoC). Abhinandan was chasing an F-16 of Pakistan after it tried to intrude the Indian airspace in the early hours of February 27. During the chase, Abhinandan shot down the Pakistan Air Force’s F-16 but had to himself eject from his plane that had taken a hit. India Air Force had carried out air strikes in Pakistan across Jaish-e-Mohammed’s camps in response to the dastardly Pulwama attacks in which 40 CRPF personnel lost their lives on February 14. IAF’s Mirage 2000 crossed the LoC and struck the JeM camps deep inside Pakistani territory, till Balakot.

Check out some of the social media reaction for this strategy here :

He is in custody. He must be wondering y pak released him to face enquiries n interrogations in india

After the statement of wing commander Abhinandan about Pakistani tea, a tea man in Pakistan hang the poster on his tea stall and write on this poster with Abhinandan photo “Tea that makes Enemies Friends” 😂 pic.twitter.com/ECaeCbfdK8

That’s an interesting name for a tea stall ☕️😀#Abhinandan pic.twitter.com/lrpIl6EiZJ

Previous articleThis Video Of Our Very Own Lydian Winning Title Of The WORLD”S BEST Will Give You Happy Tears !! WATCH !!
Next articleSivakarthikeyan & Vijay Devarakonda To Fight For This Reason ?? SHOCKING !!

Television actress Sreenithi who recently grabbed headlines due to her review about "Valimai" in a theatre premises and her Instagram videos about depression, once...

"We are the Boys" is a gang formed by the five contestants of Bigg Boss Tamil season 3. It consists of Mugen, Sandy, Tharshan,...