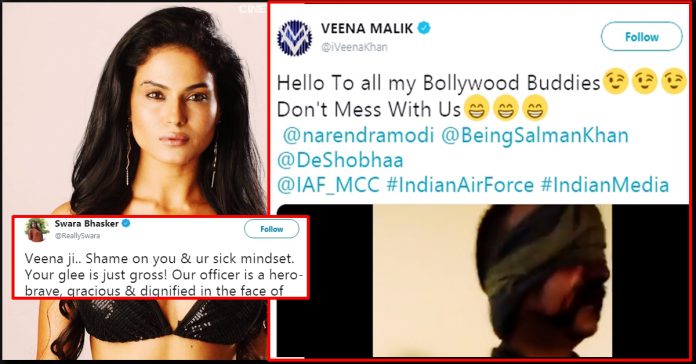 Amid rising tensions between the nuclear-armed nations, members of the film fraternity from both India and Pakistan have called for peace and are wishing for the safe return of the Indian Air Force pilot.

After almost two weeks India woke up to a great news that they wanted to hear since 14th February, when a SUV full of 350 kg of explosives rammed into the CRPF convoy, it took lives of more than forty of our Jawans. Later a video surfaced where Pakistan based militant group Jaish-e-Mohammed claimed responsibility of this act.

Indian Air Force (IAF) carried out surgical air strikes across the Line of Control at 3.30 in the morning. India avenged our Pulwama martyrs by demolishing JeM’s training camps and launch pads. Twelve Mirage 2000 fighter jets dropped laser guided bombs completely destroying over three hundred militants within 19 minutes. Celebrities all around reacted to these incidents according to their national sentiments.

Their #Surgicalstrike2 was as real as Her Horse in her latest Film😂 pic.twitter.com/dAY1u9mbQr

Veena even tagged Salman Khan in her tweet taunting about the failed surgical strike, as according to the Pakistan government no casualties have been reported. She even posted a video in her official Twitter handle claiming him to be an Indian pilot who crossed into the Pakistani territory.

Bollywood actress Swara Bhasker was quick to react to Veena’s post. Condemning the tweet she wrote, “Veena ji.. Shame on you & ur sick mindset. Your glee is just gross! Our officer is a hero- brave, gracious & dignified in the face of capture. At least some decency from that major in you army who was questioning #WingCommanderAbhinandan or the many Pakistanis suing 4 peace #sick.”

Veena ji.. Shame on you & ur sick mindset. Your glee is just gross! Our officer is a hero- brave, gracious & dignified in the face of capture. At least some decency from that major in you army who was questioning #WingCommanderAbhinandan or the many Pakistanis suing 4 peace #sick https://t.co/KvJH8ClkmW

Even some of the followers of her showed their disappointment :

Leave everything. You will never see Bollywood again. You are yet to see what this govt and our forces can do to you again and again.

At least you guys knows our Bollywood actors well, we didn’t heard any famous actor from your country.

I am glad you are tagging public figures in your posts. This is not only exposing your dumbness but also making sure that your all doors to Indian Film industry are closed permanently!
Aur @akshaykumar kaam dhande wala admi hain unlike you!

You used to wash Ashmit Patel’s undergarments in big boss….. Please keep your profession limited to that only…..

When we will start, you will have to kneel down to save your life.#Jai_Hind

I am surprised, you are still alive