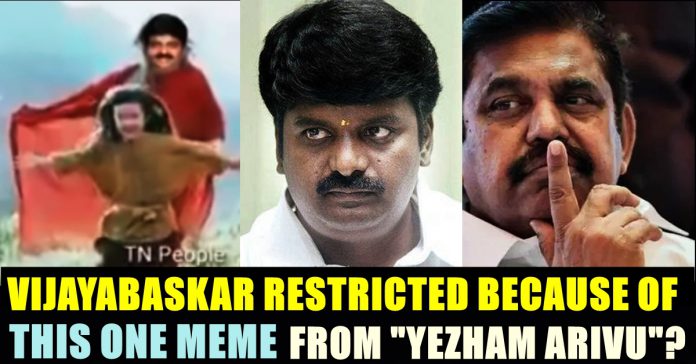 This One Particular Meme Made ADMK Seniors To Restrict Vijaya Bhaskar ?? WATCH

For past few days, Health Minister Vijayabhaskar who was very much active since the Corona outbreak in tamilnadu, is missing. State Health secretary Bheela Rajesh is addressing the media for past three days. The latest reports of her press meet said that, 102 new people reported positive for the novel coronavirus. This increased total number of positive cases to 411 in Tamilnadu. Among the 102 cases, 100 of them linked to the Delhi conference. One of the rest two, visited US and the other one’s travel history is being investigated.

Till March 31, It is Vijaya Bhaskar who shared the details of the infected patients. Nowadays he refrained himself from giving such details and it raised speculations among the public. Now, a recent video of Vikatan , has reported that a particular video meme which surfaced in social media platforms caused the damage for Vijaya Bhaskar in his own party.

Health Minister Vijayakumar has been very much active in field as well as in Twitter. He who was busy visiting hospitals personally and checking the facilities it contains to make appropriate decisions regarding the prevention of Coronavirus, also attended a number of press meets to tell media the exact situation of state Tamilnadu. His MBBS and MD degree became handy as he could have a better understanding about the situation.

People were praising him beyond party limitations for the way he worked to prevent Corona Virus to spread across the state. Now, all of a sudden, the minister is not appearing in front of media and his twitter timeline is not active as before. This recent video report of Vikatan, pointed out a particular video meme which angered the senior members of ADMK party.

Many memes and videos praised the efforts of the health minister, in a way of encouraging him. One such video meme backfired and restricted Vijaya Bhaskar from giving press meets. The video of the meme belongs to Suriya-A.R Murugadoss’s blockbuster film “Yezham Arivu”. The video was morphed in a way of portraying Vijayabhaskar as “Bhodhi Dharman” and the child he saves was portrayed as “Tamilnadu”.

When Coronavirus asks his Guru why it couldn’t make any damage in Tamilnadu, The Guru asks him to leave the state immediately as it belongs of Vijayabhaskar. This particular video meme was widely shared across the social media platforms. Watch the video meme below :

@Vijayabaskarofl sir, I got this below video memes and it is looking very nice and you deserve for this. #stayhome pic.twitter.com/fmZBpuGKKj

The latest tweet of the health minister informs the people of Tamilnadu about current stats of the state.

What do you think on a video meme causing trouble for a Minister of Tamilnadu ?? Comment your views !!

Previous articleFollowed By Gambhir, Yuvraj Expressed His Disappointment For Not Mentioning Him !!
Next articleModi Got Inspired From This England Pacer ??

Despite of putting up a fantastic display of skill and tenacity, the Indian Women's hockey team lost to World No. 5 Argentina at the...

Actor Sandhanam who is busy acting movies as a lead actor, in a recent promotional event of "Captain" movie of Arya, has said that...