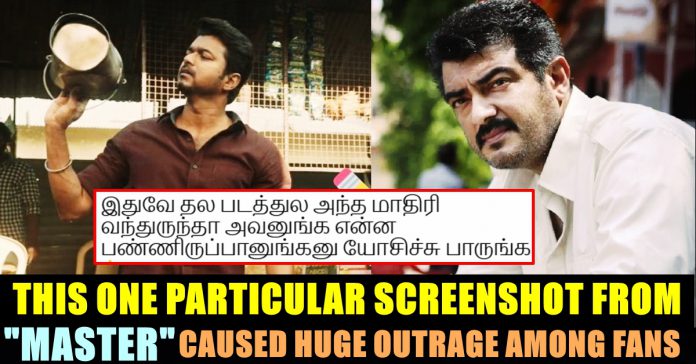 This One Particular Frame From “Master” Caused Outrage Among Vijay & Ajith Fans !!

Fans started decoding the film “Master” frame by frame as soon as it got released in Amazon Prime video officially. A particular screenshot from the Vijay starrer caused huge outrage among Vijay and Ajith fans in the micro blogging social media site to an extend two ugly hashtags against both the actors are trending nationwide in it. The controversial screen shot shows a news paper headline about actor Ajith Kumar, arch rival of the “Master” actor, getting injured during his film shooting. Though it is not known whether the makers of “Master” placed it as a property intentionally or accidentally, fans started involving in ugly verbal spat in Twitter.

Amidst Master’s OTT release, several kind of reactions are surfacing in Internet from the fans of Tamil cinema. Some of the ardent fans of actor Vijay who wanted their idol’s film to collect more in theatres, expressed their disappointment and said that the film should get released on Amazon after 10 more days. However, the film started streaming in the OTT platform since the midnight of 29th January.

The film became a subject to both appreciation and criticism as it became accessible to a wider audience now. Unexpectedly, a particular screenshot from the film which shows a news about actor Ajith getting injured started trending in the internet with comments slamming Vijay by accusing him of deliberately committing the news paper in the frame.

“Ajith Jumped and the membrane of his leg got torn apart” the news of “Kumutham” magazine reads.

Check out the screen shot that is doing rounds in social media below :

On seeing this, agitated Ajith fans vented their emotions out posting derogatory comments about Vijay. A fan stated that the news originally got surfaced in the year 2017 and the “Master” actor intentionally added this news as apreoperty tp defame Ajith.

Once Again I Said " The Man With 0% Maturity Level That Is @actorvijay " 👌😬#எச்சநாய்விஜய் | #Valimai pic.twitter.com/jDrXurZYuD

Proud To Be Fan Of This Man 😍🔥

In response, fans of actor Vijay trended a hashtag against Ajith as well. They made similar accusations against actor Ajith and posted videos and tweets to prove the same.

Dear Ajith fans. If @actorvijay annan wanted to degrade, whats the purpose of him narrating kathal kottai story in the movie ? I'm pretty sure he woudnt even have looked at this poster during shoot.

Some over enthusiastic assistant would have done it. Ignore and move on !! pic.twitter.com/iv0zUu28PE

However, neutral fans and people who use social media to kill time felt bad on seeing such ugly hashtags trending nationwide and wanted to stop the fight between the two groups. It is high time for the fans to realize that both the actors are having a strong bonding between them in terms of friendship. A healthy rivalry is always required for the growth of the cinema industry but fans abusing each other personally and making derogatory comments about the stars needs to be stopped immediately.

A Chance For The City Residents To Grow Their Own Food In Real Farm !! : Inspiring Initiative To Be Embraced !!

Imagine a scenario where you don’t have to visit a garden to buy vegetables. What’s better, you can choose to grow what you want...