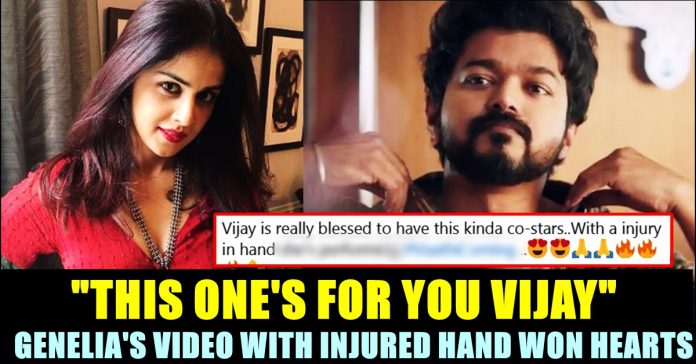 “This One Is For You Vijay” Genelia’s Sweet Surprise Won The Hearts Of Vijay Fans !!

After the one year celebration of “Vaathi coming” song, actress Genelia who paired with actor Vijay in a romantic film named “Sachein” came up with a video dedicating to her co-star. In the video, she was seen shaking her legs with her husband and friends. To our shock, the actress performed for the chart buster with her injured hand which made fans to worry a bit. However, the video is going insanely viral among the online fans of actor Vijay.

Three days ago, the film crew of “Master” celebrated the one year of “Vaathi coming” by releasing a video which included the footages of fans across the world dancing for the song. It also showed some of the important celebrities such as Ravichandran Ashwin, Dinesh Karthik celebrating their victory by dancing for the song.

Even after the film completed its theatrical run, the craze created by the “Vaathi coming” of Vijay starring “Master” is still unwinding. Before getting released in theatres, the Aniruth’s fast number released on youtube and left the fans humming. It was played as a wake up song for the contestants in the season four of Bigg Boss show. After the visuals got released, the song attracted millions and millions of fans along with celebrities from other notable industries.

Ashwin went one step ahead and made his teammates Hardik Pandya and Kuldeep Yadav to shake their legs for the song as well. “Vaathi should be happy!! with @hardikpandya93 @kuldeep_18” the cricketer wrote while releasing the video in his official Instagram account.

IPL team Rajasthan Royals recently made a video morphing Vijay’s face with Sanju Samson only to garner thousands of likes and retweets.

In the video Genelia could be seen dancing for the song along with her husband Riteish Deshmukh and their friends. Sharing the post, Genelia wrote “This one’s for you Vijay.. Celebrating your success always. #vaathicoming – with my besties”

Genelia began her acting career with the box-office hit Tujhe Meri Kasam in 2003. She was recognized for her role in Boys the same year, and later established herself in Telugu cinema by acting in several Telugu films during 2003–2012. She paired with Vijay in “Schein” directed by John Mahendran.

Check out some of the reactions from Vijay fans below :

Then – #ShilpaShetty grooved to Vaathi Coming and captioned it "This is for you Thalapathy Vijay, Love this song!"

Now – #Genelia grooves to Vaathi Coming and captioned it "This is for you Vijay.. Celebrating your success always" #Master @actorvijay @geneliad @TheShilpaShetty pic.twitter.com/LH2LKSqi6R

Imagine how massive it would be if all of Thalaivar #Vijay's co-stars release a video grooving for #VaathiComing like @geneliad has done. I'm waiting particularly to see what one of Vijay's best dancing co-stars, @shriya1109, does. #Master #Geneliahttps://t.co/TeQdCmrf54

Vijay is really blessed to have this kinda co-stars..With a injury in hand she's performing #VaathiComing ..😍😍🙏🙏🔥🔥🔥💪 https://t.co/r8F0yrfnI8

Previous articleThis Popular Heroine To Pair With “Legend” Saravana In His Debut Film !!
Next articleTwitter Users Slammed Abishek Raaja For The Way He Interviewed Regina !!

Jaydev Unadkat, the left-arm pacer from Rajasthan Royals, who constantly got trolled for his poor performance in this IPL has replied to one of...

Tamil Actress Condemned Virat Kohli For His “No Crackers” Comment !!

Virat Kohli has been facing severe criticism for a comment he made on Diwali day while wishing people for the special occasion. They accused...