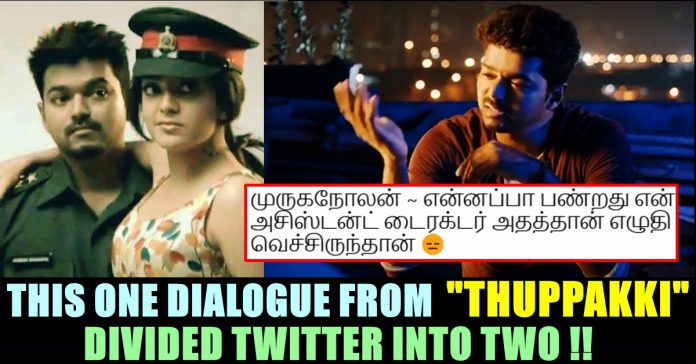 Whenever a popular film gets streatemed in Television, users of Internet would either laud or criticize the film and its scenes to express their opinions to their followers and to their fellow online users. Vijay-A.R Murugadoss’s “Thuppakki” got streamed in Vijay Tv on 9th of July for the nth time and many watched the film without having a choice due to the lockdown restriction. The film which is a biggest break for both Vijay and A.R Murugadoss, widely appreciated by the critics and by the audience for its engaging screenplay and unexpected climax. Vijay’s new look and the way he carried himself as “Jagdish”, an army man and a specialist in DIA (Defence Intelligence Agency) impressed his fans and they are eagerly waiting for the sequel of it.

The film’s plot revolves around Jagdish destroying the sleeper cells of our country with his brilliance and with the help of a limited crew of paralyzed army members who served the nation once. The film which was directed by A.R Murugadoss, had actress Kajal Agarwal as female lead. While Vidyut Jamwal played as the antagonist, Sathyan and Jayaram appeared in supporting roles. Harris Jayaraj composed music for the film whereas Santhosh Sivan cranked the camera. The editing process was handled by ace editor Sreekar Prasad and the film was bankrolled by Kalaipuli. S. Dhanu.

While the film is being lauded widely for its patriotic content and never before seen climax twist since its release time, now, a 14 seconds video clip from the movie was uploaded by a Twitter user named as “Go easie”, condemning a particular dialogue from the film uttered by the protagonist. In that scene, to make a corrupted police officer to kill himself, Jagdish would narrate him the consequences if he denies to do so. The protagonist will also provoke him by saying that his family will get benefits if he kills himself during his duty period. “If I kill you with my gun, I have to tell the reason to the authorities. Your own family will spit on your grave for involving in such cheap act. Your children will beg in signal. Your wife will become a prostitute and would call men by signalling in nights” Jagdish would say to make the officer kill himself.

Adding the clip, the twitter user wrote “One problematic dialogue from one overrated padam!” mentioning the part where Jagdish says that his wife will become prostitute after his death. “So single women have nothing to do other than calling random men to bed? ARM is one senseless person!” he added.

So single women have nothing to do other than calling random men to bed?

ARM is one senseless person! https://t.co/ofm0nFqLMg

This statement from the twitter user didn’t go well with the fans of actor Vijay who argued that Jagdish uttered those dialogues only to provoke the traitor to kill himself. However, many of them agreed with what “Go easie” said as well. Check out some of the various reactions this tweet received :

The movie isn’t overrated it is very good and logical for commercial film but yes that dialogue was such a idiotic dialogue I cant believe how this crossed the censor! https://t.co/td7zaCMXPy

i Agree that the dialogue in this particular scene is shit.
but tagging the movie as overrated is bull shit. https://t.co/eLYZgPTw5t

It’s ARM.
Delivering ignorant, half baked crap under the guise of intellect is his thing. https://t.co/vYafuBWGtQ

Overrated ah ?
Adei#Thuppakki is a GEM

This dialogue is just to irritate & intimidate him https://t.co/gzUdRI7gvd

What a way to embarrass the criminal!!! Excellent!

Comment your views on this dialogue and the film being called as “Overrated” !!

Previous articleIndian Fans Demanding ICC To Delete This Video !!
Next article“I Don’t Know Why I Was Born” – Vijay Sethupathi Regrets

Chennai Super Kings opener Shane Watson and Sunrisers Hyderabad leg-spinner Rashid Khan were involved in a heated war of words in a high-scoring 2019...