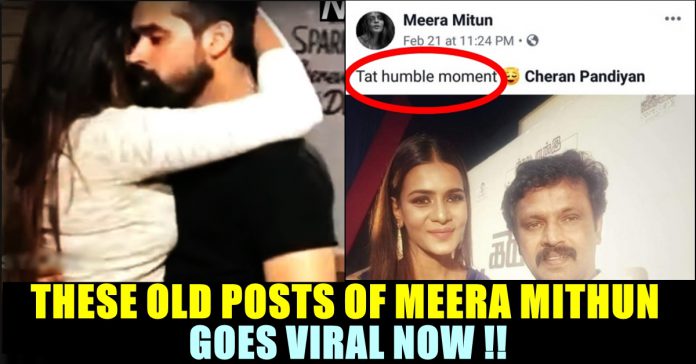 Meera Mithun is facing the outrage of social media for her behaviour in Yesterday’s episode of BIGG BOSS 3 Tamil. The show conducted a native task in this week in which the contestants inside the house got splitted into two villages. If one villager is in need of something, they should do a task commanded by the other villager in order to get what they want.

Cheran who was appointed as “Nattamai” of one village, yesterday while playing the task accidentally pushed away Meera Mithun while grabbing something from Losliya. To report about this, Meera called for a gathering and said that Cheran physically harassed her. Meera started to accuse Cheran in front of everyone. Saravanan who has opinion difference with Cheran from the first day, came in to defend the veteran director at first. “In a game it is usual for such things to happen, you don’t have to make an issue out of it in front of everyone” he said. As the argument took to next level, Cheran left the place and removed his mic.

So this is the incident #MeeraMithun was going on about. The way Meera announced & described this was completely wrong! We support Cheran! pic.twitter.com/ThcEf8TM8G #BiggBossTamil #BiggBossTamil3

At one point Cheran broke down and worried by thinking the future of his daughters. “In my 10 films, I have never kept a shot for navel and breasts. People who like me would believe me but people who dislike me would talk in my back very badly” he said to the other contestants. As soon as watching the episode, the viewers of BIGG BOSS started to dig the past of the model.

In the past, Meera took a picture with Cheran and posted it with a caption saying “Tat humble moment”

People also posted a video of her dancing intimately with men. Some even said that Meera who earlier had an issue with Tharshan, did physical contact with him at many occasions while doing the task.

#MeeraMithun did the same when she participated #JodiNo1 and accussed her co – contestant of forcibly holding her hips when dancing. Actress Sangeetha threw her out of the show @vijaytelevision @BiggbossTamil pic.twitter.com/VKlHVRabT5

For her hypocritical statements and blatant lies, Meera Mithun confronted with almost everyone inside the house. Starting from Cheran to Dharshan, Meera involved in verbal spats for no proper reason. She even questioned Losliya for striking her picture in front of Kamal Haasan.

Meera Mitun, is an Indian film actress, super model and beauty pageant titleholder who works predominantly in Tamil films. She won the title of Miss South India in 2016. She made her film debut in Sri Ganesh’s 8 Thottakkal. She also played role as Kalaiyarasan’s wife in Surya’s Thaana Searntha Kootam. She allegedly has fraudulent case against her for cheating a costume designer. It was also reported that police entered Bigg Boss house to question the model yesterday.