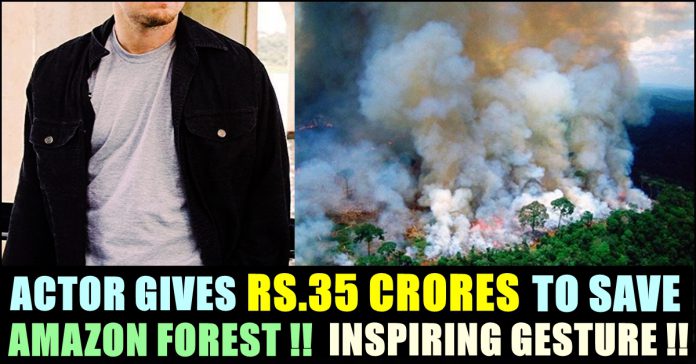 Backed by military aircraft, Brazilian troops on Saturday were deploying in the Amazon to fight fires that have swept the region and prompted anti-government protests as well as an international outcry.

President Jair Bolsonaro also tried to temper global concern, saying that previously deforested areas had burned and that intact rainforest was spared. Even so, the fires were likely to be urgently discussed at a summit of the Group of Seven leaders in France this weekend.

Some 44,000 troops will be available for “unprecedented” operations to put out the fires, and forces are heading to six Brazilian states that asked for federal help, Defense Minister Fernando Azevedo said. The states are Roraima, Rondonia, Tocantins, Para, Acre and Mato Grosso.

Hollywood superstar and environmentalist Leonardo DiCaprio who has raised a question over the lack of media coverage of the ongoing fire at the Amazon rainforest, has exhibited an excellent gesture for the disaster occured.

His environmental initiative called Earth Alliance has pledged $5 million which is Rs.35 crores , towards the preservation of the Amazon rain forest following the wildfires.

The new organisation’s emergency Amazon Forest Fund is working to support local partners and indigenous communities in their efforts to protect the sensitive habitats within the Amazon, reports variety.com. The funds will be donated to five local organizations.

According to the fund’s website, more than 72,000 fires have been reported by Brazil’s National Institute for Space Research (INPE) – a sharp growth from 2018’s 40,000 fires, which can largely be attributed to an unprecedented surge in deforestation by cattle operations and feed crops.

The alarming wildfires have also sparked widespread outrage online, prompting a number of celebrities to use their social media platforms to raise awareness.

“The largest rainforest in the world is a critical piece of the global climate solution. Without the Amazon, we cannot keep the Earth’s warming in check,” DiCaprio had written on Instagram.

#Regram #RG @IamNickRose: Terrifying to think that the Amazon is the largest rain forest on the planet, creating 20% of the earth’s oxygen, basically the lungs of the world, has been on fire and burning for the last 16 days running, with literally NO media coverage whatsoever! Why?

Yesterday, we launched the Amazon Forest Fund, the first initiative from the newly formed @EarthAlliance. The fund was set up to help local partners and the indigenous communities on the front lines protecting the Amazon. Please follow @EarthAlliance to stay up to date with the action taking place and for further ways that you can help support. You can get involved and donate right now at ealliance.org/amazonfund (#linkinbio) Photo: @chamiltonjames, 2017

The Amazon desperately needs our help. Whether you are a philanthropist, an organization, or an individual, please help donate to the @EarthAlliance Amazon Forest Fund to help the local partners and indigenous communities protecting the Amazon, the wildlife that lives there, and the health of the planet overall. 100% of the proceeds go to local organizations. Preventing these fires requires protecting the forests, so help Earth Alliance fight deforestation in the Amazon rainforest. If you cannot contribute, follow @EarthAlliance and help spread the word so we can continue to generate action and change. We hope you will join us however you can. Get involved and donate at ealliance.org/amazonfund (#linkinbio)

This is truly an inspiration which will make people donate from world wide. Let’s make people aware of his gesture !!

Vijay Devarakonda openly said that he got irritated with the attitude of people celebrating the way Parvathy questioned him. Speaking at the film festival...