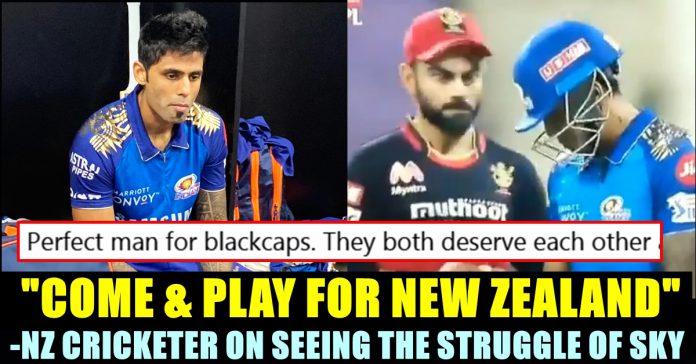 This New zealand Cricketer Wants Suryakumar Yadav To Play For His Team !!

After seeing Suryakumar Yadav’s knock in the league match against Royal Challengers Bangalore, many cricketers including Ravi Shashtri and Sachin Tendulkar lauded the young talent for his determination. Many other cricket experts and former cricketers said that it is high time for him to wear blue jersey and blamed selectors for not selecting him in the upcoming Australia tour.

“Class inn yet again. hope selectors are watching him play” wrote Harbhajan Singh to express his disappointment over the non-selection of Suryakumar Yadav. “I keep saying it, oh how I love watching this guy in full flow” said JP Duminy. When Albie Morkel lauded his batting as “class”, Sam billings came up with a tweet writing “Suryakumar Yadav is a serious player!”

Former Indian cricketer Akash Chopra went one step ahead and said “Surya Kumar Yadav should’ve been on the flight to Australia. For the T20i series.”. Here are their tweets :

Surya Kumar Yadav should’ve been on the flight to Australia. For the T20i series. #MI

Suryakumar Yadav is a serious player!

Meanwhile, former New zealand cricketer Scott Styris who played for Chennai Super Kings earlier, posted a tweet suggesting Suryakumar Yadav to play for New zealand cricket team if he wants to be an International cricketer. New zealand team which is currently being captained by Kane Williamson, almost won the world cup in 2019. They lost the match against England due to the rules of ICC which said that the boundaries of both the teams should be counted if scores are level.

Scott Styris, an aggressive right-handed middle order batsman and a right-arm medium pace bowler of his prime time, funnily denoted that he could play for New zealand by writing “Cough NZ Cough” in his tweet. “I wonder if Suryakumar Yadav fancies playing International cricket he might move overseas. CoughNZCough” his tweet read.

Fans took his suggestion seriously and started imagining on what position SKY should bat if he plays for New zealand. Check out some of their reactions below :

Will be helpful after Ross retires 🏃

He will just flourish playing under Sir Kane williamson❤️ for sure

It was fun watching you on the dugout. Have a safe flight back to NZ after this tweet. #CoughBCCIcough

Perfect man for blackcaps. They both deserve each other and the whole cricketing fraternity will be glad to see that combination.

Gowri G Kishan who rose to fame among Tamil audience for her role in 96 as Junior Jaanu, acted in the most expected film...