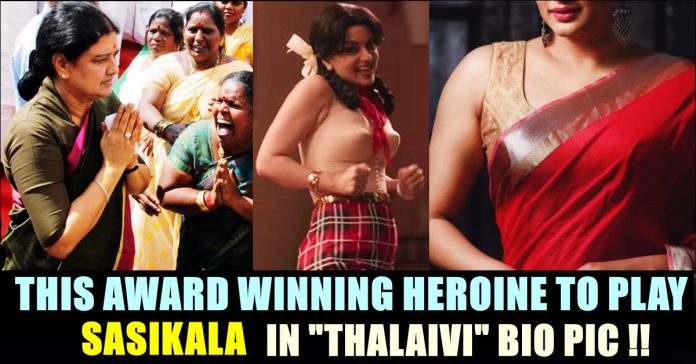 The first look of “Thalaivi” starring Kangana Ranaut released lately. Kangana Ranaut is known among Tamil audience for the movie “Dhaam Dhoom” where she played opposite to “Jayam” Ravi as female lead. Many fans of Tamil cinema are excited to see the actress playing the role of one of the powerful chief ministers of state Tamilnadu.

As soon as the teaser and First look of “Thalaivi” released, entire Internet came up with opinions about which actress should have done the role of Kangana Ranaut as they did not impress the fans in big time. Being made as a biographical picture of Thalaivi J. Jayalalitha, it was directed by “Madharasapattinam” fame A.L Vijay. The one and half minute teaser showed the younger and older version of late chief minister J.Jayalalitha.

The film also stars actor Arvind Swamy in the role of M.G. Ramachandran. However, fans who are waiting to see this film on big screens speculated many actresses to play the role of Sasikala, a dear friend of J.Jayalalitha. Sasikala Natarajan who is currently serving her jail term for the corruption she committed during the ruling time of Jayalalitha, is one of the important person in the life of the former chief minister.

The source added that Priyamani is very much interested in playing the role of Sasikala as she finds the role as equally challenging to the role played by Kangana. The presence of Sasikala in Jayalalitha’s personal life made a big impact which makes the Priyamani’s character as a major key in the film which is going to get released on 26th June of 2020.

Talking about Kangana playing the titular role in the film, A.L Vijay, the director of the movie, to India Today said “This is a pan-Indian film, and Kangana is apt for the role. She is one of the biggest stars in India today and I think it is right that a top star plays the role of an important politician. We consider this a pan-Indian film, not a regional one. There was a lot of discussions before the decision was made to cast Kangana; we met several people as well.”

What do you think on these actors playing the main personalities of Jayalalitha’s life ?? Comment your views below !!