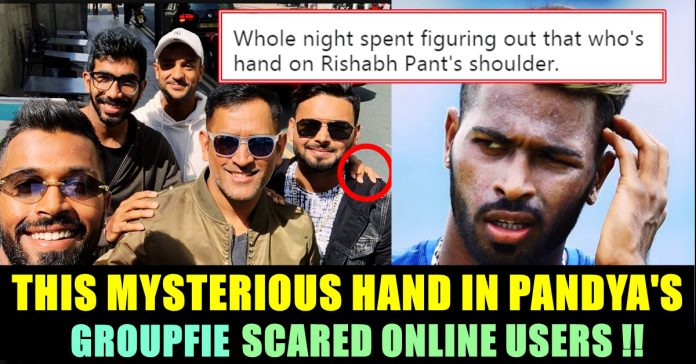 Successful Indian team who are in the second place are taking on Sri Lanka in their last league game in this ongoing world cup tournament. Along with India, New zealand, England and Australia are three of the teams that are going to compete each other in the semi finals. Apart from posting pictures after winning a match, Indian team players, especially youngsters such as Rishabh Pant and Hardik Pandya would often post pictures of their outings in their official social media accounts.

Since the start of the tournament, many such posts from the players surfaced online and went viral in Internet. The recent post of Hardik Pandya, in which he is seen psing with former captain Dhoni, Rishabh Pant, Mayank Agarwal and Jaspirit Bumrah.

He added a caption to it which said “Boys’ day out 🤩”. Check out his post here :

However unlike other posts of the cricketer, this picture grabbed special attention from the netizens for a bizarre reason. It is nothing but the hand of Pant’s shoulder. Bumrah’s both the hand were seen on Dhoni’s shoulder where as Mayank Agarwal was seen standing far behind the youngest. Pandya is seen taking selfie and Dhoni’s hand were also visible in the picture.

As soon as the picture surfaced, Confused  netizens posting hilarious comments about the mysterious hand. Check out some of them here :

Whose hand is on Pant’s left shoulder? Photoshopped? 😀

Whose hand is on Pant’s shoulder ? Is anyone hiding in this pic or an Optical illusion? #MyRahulMyPride #WIvsAFG #FancyFacism pic.twitter.com/XuqadgkFhV

It’s been a day. Can you please tell us the mystery behind the hand on Pant’s shoulder?@hardikpandya7 @RishabPant777 @Jaspritbumrah93
😑

He got a very long hand then…

Bumrah’s both of his hands are laid on Dhoni shoulder’s ,
Mayank Agarwal far behind.
Then who laid hands on Rishab pant shoulder ? 🤔 pic.twitter.com/AbTBYPj3Bn

However, beyond all the theories, the only person who could solve the mysetry is Pant himself. Let us wait for him to finish today’s match and let us make him answer for it !!

Previous article“I’m So Happy That You Are Out Of Indian Team” Woman Cursed Ashwin !! Check His Reply !!
Next articleRavindra Jadeja Took A Wicket In His Very First Over !! CSK Brutally Trolled Sanjay Manjrekar !!

A four-year-old boy drowned after he got trapped in a washing machine filled with hot water at his home in Ajman, the police said. The...