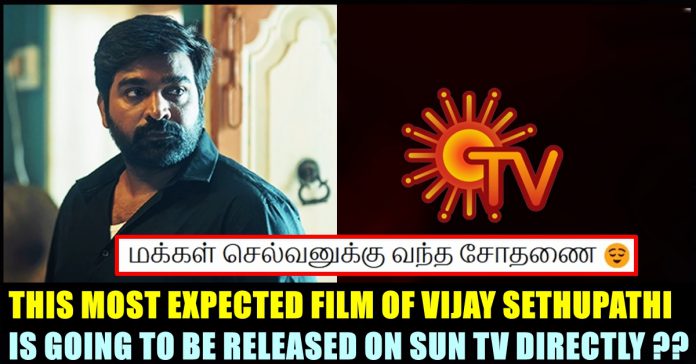 Kollywood films skipping theatrical and OTT release to get directly premiered on Television channels became a thing nowadays. “Vanakkam da Mapley” of “SMS” fame Rajesh starring G.V Prakash and Amritha Aiyer got premiered on a special occasion on Sun Television. On the auspicious day of Pongal festival which also marked the birthday of the film’s protagonist Vikram Prabhu, “Pulukuthi Paandi” directed by Muttiah released on Sun TV. Lakshmi Menon played the female lead in the film.

Now, it has been reported that one of the most expected films of “Makkal Selvan” Vijay Sethupathi is going to get released on Sun TV directly on the special day of Hindu festivel “Vinayagar Chathurthi”. Amidst the COVID 19 lockdown situation, many films are skipping theatrical release and are directly getting released on OTT platforms such as Hotstar, Netflix, Amazon etc. Suriya’s “Soorarai Pottru”, Dhanush’s “Jagame Thanthiram” are two of the high profile films that got released on OTT platforms, despite of the request made by fans to release them in theatres.

Now, as Tamil nadu government is hesitating to relax the restrictions on theatres reopening, makers of several other films are selling their films to the online streaming platforms. “Vaazhl” of Sivakarthikeyan productions was sold to Sony whereas Sivakarthikeyan’s most anticipated film “Doctor”, directed by “Beast” director Nelson Dilipkumar is rumoured to be streaming on Hotstar.

Now, a report of Lets OTT Global has emerged saying that one of the Vijay sethupathi’s highly expected film which was initially expected to be sold to Hotstar, is going to be streamed on Netflix and also going to get a direct premiere on SUN TV on the auspicious day of “Vinayagar Chathurthi”. Vijay Sethupathi who is currently active appearing in films across the nation, is also going to host a show in SUN TV named “Master Chef”.

His line up includes Kamal Haasan’s Vikram, Mumbaikar (“Maanagaram” Bollywood remake), Gandhi Talks (his debut as hero in Bollywood, ) Laabam, Kadaisi Vivasayi, Kaathu Vaakula Rendu Kaadhal, Viduthalai, Idam Porul Yeval etc. Debutant Delhi Prasad’s “Tughlaq Darbar” is also one of the most expected films of Vijay in which he is going to feature in dual roles for the first time in his career.

Along with Vijay Sethupathi, the film’s cast includes Parthiban, Raashi Khanna, Manjima Mohan, Gayathrie and others. The music of the film is composed by Govind Vasantha of “96” fame. The latest report had said that the film is going to get a direct Sun Tv premiere and Netflix release simultaneously. “Vijay Sethupathi’s #ThuglaqDarbar changes hands from Hotstar to a Sun TV Direct Premiere. The film will be aired on Sun TV for Vinayagar Chathurthi, followed by a same night release on NETFLIX.” read the post of Lets OTT.

The film will be aired on Sun TV for Vinayagar Chathurthi, followed by a same night release on NETFLIX. pic.twitter.com/zUNCsLVnOm

Fans got surprised on seeing this update and hoped it’s not true as they believe Vijay Sethupathi is one of the highly rated stars whose films should release only in theatres. However, we have to wait for the official word from the film’s production house to confirm the same.