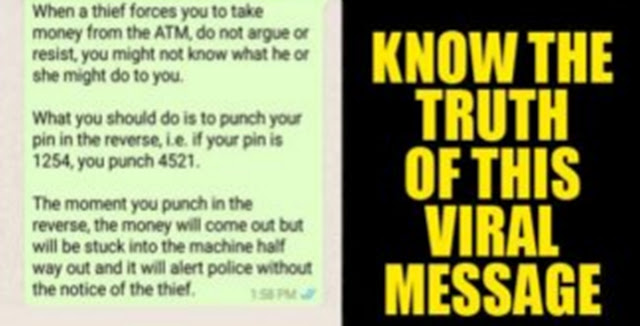 This viral message is spreading with full speed on the social media! In this message it is said that if a person kidnaps you and forces you to withdraw cash from the ATM, then don’t oppose. There is one method through which you as well your money would remain safe.
The method stated in the viral message is easy, but wasn’t not verified whether is the fact or just a rumor.

More about this viral message!

When the kidnapper forces you, go as per him and enter the reverse code. Suppose your ATM pin is 1234, then enter 4321 instead of that. This way, the cash would be stuck inside the machine. Amidst this, the nearby police station would be notified by the back. The ATM door would be automatically locked and you would be safe.

Is this method really true?

However, what are you going to do if your ATM PIN is either 2222 or 2332? What kind of protection are you going to get or how is the police going to be alerted? Do not worry, as police is never going to come! Yes, this is because this such kind of system actually doesn’t exist at all!

Verification of this method!

For seeing whether the method actually works, we tried doing the same thing as mentioned in the message. When this was tried, neither was the police notified nor was the ATM door locked. However, when the reverse pin was entered, the machine alerted that the wrong pin was entered!

Even Taj Hasan, the Chief PRO of Delhi Police stated that when the reverse Pin is entered, no notifications reach the police. Hasan also stated that banks do have their own alarms, but they don’t have any sort of link with the police.
They have appealed to the public that if they come across any such situation, they must dial 100 and inform the police. This message that was going viral has proved to be fake.

This rumor cannot be ruled out completely!

Basically, a system was going to be implemented i.e. ATM SafetyPIN software through which users can alert the police by entering the PIN in the reverse order if forced. It was patented by Joseph Zingher, the Illinois lawyer. However, it isn’t implemented as of now!

It is not practically possible to implement this!

If it would have been implemented, the cost would have been increased. Secondly, the method isn’t a full proof one, because till the time the police reaches, the robber can run away easily, breaking the doors. Thirdly, if the robber comes to know that the wrong PIN is being entered, the victim can be harmed. Last but not the least, it might give rise to several false alarms.