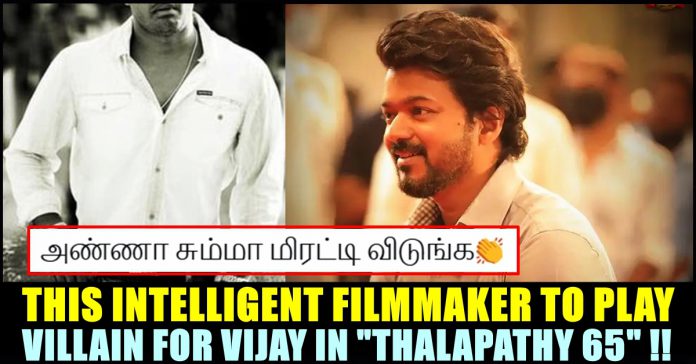 The new update on one of the main casts of most expected “Thalapathy 65” has been surfaced in the Internet and the fans are going gaga over it. Collaborating with Sun pictures after Sarkar, Vijay, this time going to join hands with young filmmaker Nelson Dileepkumar for his 65th film. The crew made the announcement by uploading a video in their respective social media accounts. Music of the film is going to be composed by Aniruth Ravichander.

The video showed actor Vijay having a conversation with the owner of Sun pictures Kalanithi Maran in the office of Sun TV. After Neslon joined them, Vijay shakes his hands with Kalanithi Maaran and the motion video of the grand announcement starts filling the frame. Tentatively titled as “Thalapathy 65”, the film is planned to go on floors soon. “Happy to announce my next film with @actorvijay sir” wrote Nelson Dileepkumar while sharing the announcement.

Most recently, it was announced that actress Pooja Hegde is getting onboard for the project as main lead. it has been officially announced that Pooja Hegde is going to pair opposite to Thalapathy Vijay in his next film which is tentatively titled as “Thalapathy 65”. Making the announcement public, Sun pictures wrote “The gorgeous Pooja Hegde onboard as the female lead of #Thalapathy65 !” by releasing a video specially made for her.

Now, according to Valai pechu, director Selvaraghavan who is going to make his acting debut through “Saani Kaayitham” has been approached to play villain in the upcoming project of Vijay. Talks are going on between the filmmaker and the makers of “Thalapathy 65”, the report said. Selva is known for making impactful films in directorial career and has an impressive filmography. Dhanush who worked with the filmmaker in a number of films, has often said that Selva is naturally an impeccable actor.

However, we have to wait till the official announcement from the film crew. Check out some of the reactions that surfaced in Internet for the buzz :

Comment your views on Selva playing villain for Vijay !!

Previous articleSiddharth’s Gives Back To Troller Who Compared Him With Swara !!
Next article“It’s Not About The Money” – Young Tamil Actress On The Divorce Of Bill gates- Melinda !!

Anitha Sampath got officially evicted as the 10th contestant from the Bigg Boss house on the Sunday's episode of the show. Her eviction...

One More Crime In Chennai.. A Girl & An Old Man Killed

Two persons died in a  horrific accident in Foreshore EState ( Pattinapakkam) on Monday night. The dead were a young girl in her 20s...