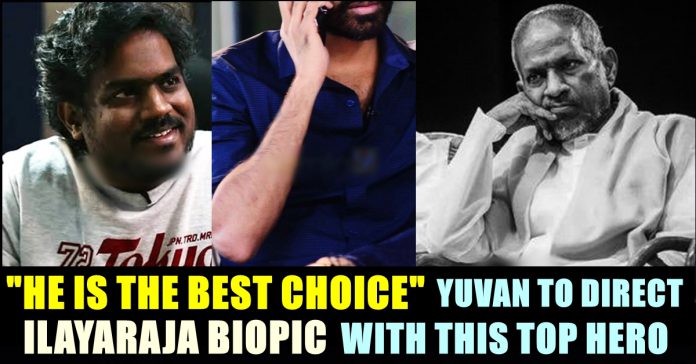 It is a season for biographical pictures in Indian cinema it seems. In recent years we have witnessed the bio pics of significant personalities such as Narendra Modi, Manmohan Singh, Actor Sanjay Dutt, Former Captain Mahendra Singh Dhoni, Sachin Tendulkar in big screen. Life history of J.Jayalalitha and actress Savithri were also received positive response from the audience. Actor Surya’s upcoming film “Soorarai Pottru” is also believed to be a biographical film of Air Deccan founder G.R Gopinath. Now, a recent news has suggested that legendary musician Ilayaraja’s life journey is going to be made as a film soon.

Ilayaraja is one of the most experienced and refined musicians of all time. Widely considered as one of the greatest Indian music composers, he is credited for introducing western musical sensibilities in the Indian musical mainstream. Reputed to be the world’s most prolific composer, he has composed over 7000 songs, provided film scores for more than 1000 movies and performed in more than 20,000 concerts. Now the musician who is 76 years old has composed music for Mysskin’s Psycho movie which is going to hit the screens soon.

Ilayaraja is a recipient of five Indian National Film Awards – three for Best Music Direction and two for Best Background Score. In 2010, he was awarded the Padma Bhushan, the third-highest civilian honour in India and the Padma Vibhushan in 2018, the second-highest civilian award by the government of India. In 2012, he received the Sangeet Natak Akademi Award, the highest Indian recognition given to practising artists, for his creative and experimental works in the music field.

According to Times of India, Yuvan Shankar Raja has stated that Dhanush is the perfect actor to portray the role of his father. He reportedly said that the best choice to play his father was the “Asuran” actor. This made many of the fans of Dhanush, Ilayaraja and Yuvan Shankar Raja happy as they also felt that Dhanush can pull this off with ease. As we all know, Dhanush is one of the top actors after Kamal Haasan and Vikram to be known for his versatility.

It is notable that Dhanush is one of a biggest fan of “Isai gnani” :

If this projects goes on floors, it will be produced by Yuvan Shankar Raja’s own production house. It is notable that the young musician made his production debut with Pyar Prema Kaadhal. Currently the YSR films is producing two films with Bigg Boss fame Raiza and Vijay Sethupathi. The films are titled as Alice and Maamanithan respectively.

What do you think on Dhanush playing the role of Ilayaraja ?? Comment your views below !!