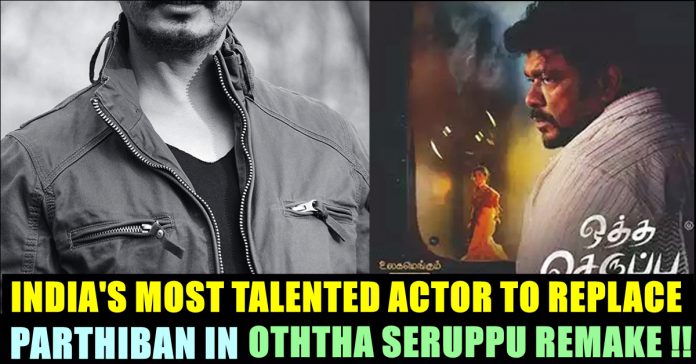 Oththa Seruppu Size 7 directed by Radhakrishnan Parthiban is winning several awards since its release. Parthiban is one of the most experimental filmmakers of all time. Known for his uniqueness, the director always interested in making films which are progressive. The man who amused Tamil cinema audience with his creations, recently came up with an unique film which revolves around only a single man.

As the film now completed its theatrical run, Parthiban sold the film to Netflix. In the online platform, the film became a huge hit and many of its subscribers are watching it. In the directors roundtable organised by Film companion south, Parthiban said that all the people who watched this film in Netflix, spent 100 crores in it. The director happily shared this news with his fellow filmmakers, though the money is not going to reach him.

Now the director and actor is busy in selling the remake rights of the film it seems. Parthiban posted a tweet in his official twitter account on January 5 in which he talked about making the Hindi version of the experimental drama. In his tweet, The director said that he is planning to do the Hindi version of “Oththa Seruppu” by having Nawazuddin Siddiqui in the lead role.

This tweet from Parthiban attracted many fans and followers who are pouring their wishes. Nawazuddin Siddiqui is one of the prominent actors in Indian cinema who became a most loved performer in a short span. His works in movies such as “Gangs of Wasseypur” “Raman Raghav” “Bajrangi Bhaijaan” gained him a value. He is known among Tamil audience for his appearance in Superstar’s “Petta” as villain.

Check out some of the reactions for this update from Parthiban :

Thanks
Send ur msg to young directors https://t.co/guOzAv1yUh

Couldn't think of a better actor than him. #IrfanKhan or #NaseeruddinShah are the next guys who could make in this list, but even then #NavazuddinSiddiqui is right on top. https://t.co/t6QYskxLWJ

What do you think on this exciting update from the “Puthiya Paathai” filmmaker ?? Comment your views below !!