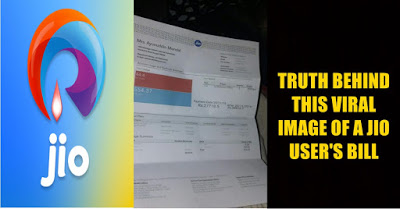 We’ve been living of our time these days with hundreds of GB’s going off our mobile data. People who were just accustomed to 2G browsing suddenly started yapping about slow 4G internet. Well Reliance Jio made every one of us such. The sudden announcement by the savior Mukesh Ambani stating free internet for all made us wild amidst our senses. Well what if that wildness was put to a stop? What if Jio suddenly asked us to pay for whatever we used?

Well the above mentioned guy got quite a shock when he got a bill for Rs.27718.5 for the usage of over 554GB of data.

This is what’s been storming the internet for quite some time. After few researches and talks eventually the bill was declared fake. The bill was photoshopped sources say.

So we could feel relaxed now. No one’s going to get a bill from Reliance for the stuffs we used as the deemed it was free till December 31. Well as an added icing to it Reliance has officially announced that they’d be providing free internet till March 31, 2017.