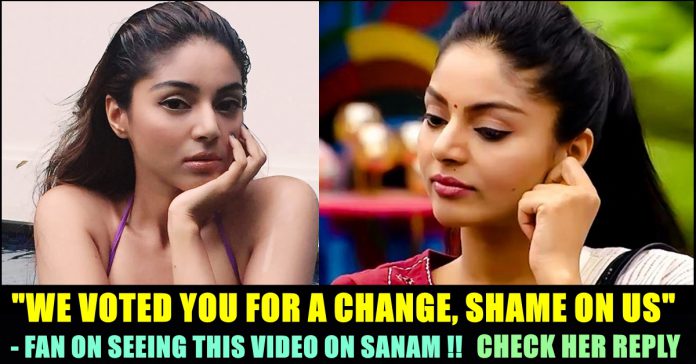 “This Is Why We Hate” – Fan Got Disappointed With This Video Of Sanam Shetty !! Check Her Reply

Sanam shetty, one of the prominent contestants of the season four of Bigg Boss show, became super active in social media platforms and started interacting with her followers. She who enjoys 6 lakh plus followers in Instagram, recently uploaded a promotional video ahead of the valentines day and suggested her followers to buy the beauty products. On seeing the video, one of her followers said that he regrets for supporting her and expressed his disappointment. Sanam replied him with the valuable reasons behind her promoting the product and convinced her follower.

Sanam shetty, a model by profession said that she has been trying to take part in the Bigg Boss show for past three seasons and always gave her best to stay inside the house. In the show, for showing her determination in the topple task, Kamal Haasan who hosted the show appreciated her.

Post Bigg Boss, Sanam became active in social media platforms with enormous number of followers supporting her. Most recently, Sanam uploaded a promotional video in her official Instagram account and suggested her followers to buy the same.

On seeing this video, one of the model’s follower said that it is main reason behind people hating celebrities. He said that he, along with other followers, voted for Sanam for a change. Now, on seeing her promoting “some random stuff”, the follower said “shame on us” through his comment.

“This is why we hate.. We voted and make you stand for a change.. But you still here promoting some random stuff.. Shame on us” read the comment of the follower.

Sanam, replying to his comment, wrote “Thanks for your support and votes🙏 I have used few of their products and I like them. I especially respect their brand ethics of local sourcing. These are the main reasons for my promotion 👍 it’s not random.”

Now, the actress has uploaded a video in her official Instagram account thanking her fans and followers for all the support they have been providing to her since her participation in the Bigg Boss show. She said that she would be grateful to Tamil and Tamil people forever for their love and support and also congratulated her co-contestants the best for their future endeavours.

“En Iniya Tamil Makkale 💞 🙏 Neenga Illame Naa Ille 🙏 Unga Anbu illame indha kondaatam Ille! This video is purely for my dearest fans, friends, followers for showering me with so much love during and after my Big Boss journey❤️❤️❤️ Best of luck to all my co contestants 👍 Big Boss Season 4 Ends with Love and our journey begins with Positivity 💞” her caption for the post read.

Previous article“Master” Actress Raised Voice Against Indian Celebrities Who Tweeted On The Protest Of Farmers !!
Next article“Master” Deleted Scene Got Inspired From This 1994 Film ??