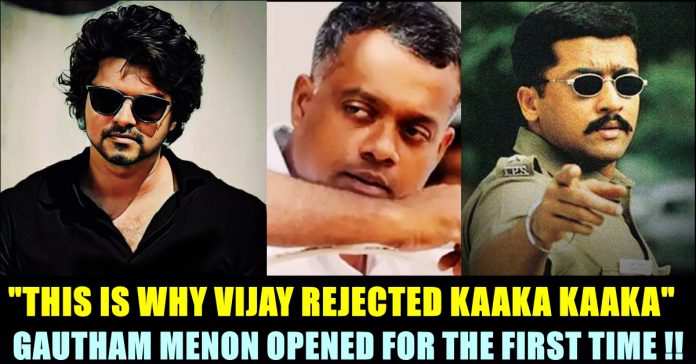 In a recent interaction with Cinema Vikatan, Ace director Gautham Vasudev menon opened on why actor Vijay opted himself out from doing “Kaaka Kaaka”. The filmmaker said that he had a 80-85 % of script and revealed that it didn’t meet the expectations of the “Master” actor. “He wanted a full completed script. That’s his way of working and right too. That’s why the project didn’t happen” he said in the interaction with the fans.

“Kaaka kaaka” which was released in the year 2003, acted as one of a biggest breaks in actor Suriya’s acting career. Along with Suriya and Gautham menon, the film contains some of other big names such as Kalaipuli S Dhanu, Harris Jayaraj, Jyothika, Daniel Balaji. After the film’s success, it got remade in several other languages due to its engaging plot and intense content.

The film’s plot revolves around Anbu Selvan, played by Suriya, a police officer, tracking down Pandya who desperately wants to take revenge on Anbuselvan for killing his brother, head of a criminal gang. Now, Gautham revealed why actor Vijay refused to do the film when he approached him.

He said that Jyothika initiated the project of “Kaaka kaaka” and made him narrate the stories to some of the top actors of Kollywood. “I have narrated the story to Vikram, Ajith and many others. Even I narrated the story to actor Vijay but somehow things didn’t fall in place” Gautham Vasuv=dev Menon said.

“I had the script worked in my mind for one and half years and shot the film with it. I went to the shoot without climax and had 80-85 % of script while going on floors. That’s why Vijay refused to do the film. He wanted a complete script. He wanted to know the climax during the narration. I said that I will complete the climax once the shoot starts but he wanted to know the complete script before going for the shoot” Gautham said. “It is how he works and is right also” he added.

Gautham also revealed that he narrated a script to Superstar Rajinikanth before “Kabali” and the project was almost on. “However, it didn’t go as per plan for unknown reasons” he said. Currently, Gautham is currently busy taking part in the OTT contents and is also involved in doing significant roles in films.

Previous article“My Girl Friend Sarah Asked Me This” – CSK Player After Going Unsold !!
Next articlePujara’s Emotional Tweet After Getting Picked By CSK !!