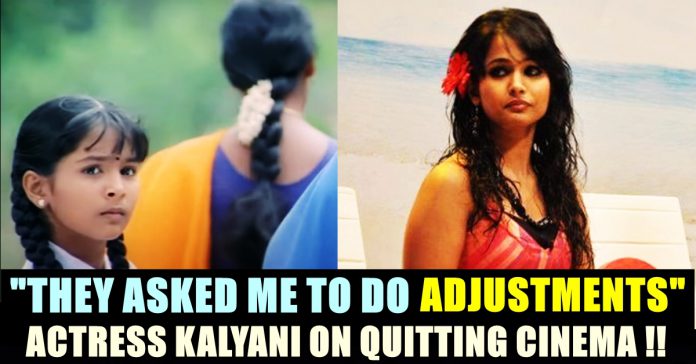 Many female celebrities of Tamil cinema came up accusing men for approaching them for casting couch. It is widely believed that many producers, directors and male actors are demanding sexual favours from heroines to cast them in their movies as lead. Most recently actress Vani Bhojan said that she got approached through her manager. “I faced one to two phone calls through manager but I never gave importance to such calls. I didn’t receive any direct contacts with any film personalities. They only contacted manager directly. I believe it will change soon. Please actors” she said in the interaction. (Also Read : Vani Bhojan Revealed How She Got Approached For Casting Couch !!)

Now, actress Kalyani who is known for acting as a child artist in films like “Alli Thantha Vaanam” with Prabhu Deva and in “Jayam” with Jayam Ravi, came up with a revelation saying that she got approached for casting couch. Kalyani who says that she didn’t receive any direct approaches, goes on to reveal that she got calls regarding that.

“When I started acting as heroine in films, they called my mother who doesn’t speak Tamil much and offered a film project which consists high profile hero and a big producer. When I Mother felt happy and accepted the offer, they said that I have to do “adjustments”. My mother who initially thought that was about “date adjustments”, felt something odd and would disconnect such call” Kalyani said in her live interaction with Indiaglitz.

“That was very very shocking and that was one of the reasons why I decided to quit cinema.” said Kalyani who further revealed about a similar approach she faced from a programming head of a popular Television channel.

Watch the video of her interaction here :

“I knew him when he was a normal director. He called me to do a show and did the show successfully. They said that they will be calling me to host the show for its sequel. I felt happy. When I was in Bangalore, he called me and said that he was going to a bar and asked me to meet him there around 8 o” clock or 9 o clock or something. When I asked him why “pub”, he said that it is for further discussion. I said that I am not free and asked him to meet for a coffee instead around 3 or 4 in the evening. But he started telling excuses and that channel never approached me for a program again.” said Kalyani. “They didn’t even approach me for the sequel of that show I did.” she added.

As said this is not the first time an actress accusing influential people in film industry regarding casting couch. Actress Varalakshmi Sarathkumar, daughter of veeran actor Sarathkumar, made a bold statement recently regarding casting couch. “They said that a heroine should sleep with Hero and producer. I don’t want an opportunity like that. I have learnt to say “no”. Yes I accept that it got delayed for me to grow in my career. Lot of people didn’t accept me to act in their films just because I was too correct. But That’s fine. Now I have completed 25 films. I worked with 25 best producers and with 25 best directors. I am signing my 29th film next. So I am happy” said Varalakshmi Sarathkumar. (Also Read : Varalakshmi Sarathkumar’s Bold Statement On Casting Couch !!)