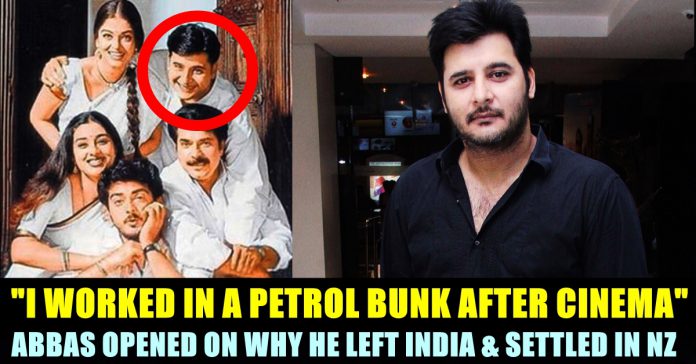 Actor Abbas who is known among Tamil audience for acting in films such as “Kadhal Desam”, “Padayappa”, “Kandukondein Kandukondein”, “Thiruttu Payale”, “Minnale” has appeared in an interaction with a youtube channel recently and the reason he stated why he left country India has made fans of Tamil cinema to share the video in a wide manner. The actor said that people in India are judgmental towards a cinema artist like him whereas people who belong to western countries gave him the freedom to do what he loves.

Abbas debuted in Tamil film industry through 1996 film “Kadhal Desam” which became a critical and commercial success. Impressed with his performance in the film, audience and media dubbed him as a “heart-throb” after which he started receiving several more offers.

After that phase, the actor started appearing as antagonist in films such as “Thiruttu Payale”, “Guru En Aalu” etc. He also acted in advertisements and one of the popular ads he featured in was “Harpic” bathroom cleaner. The advertisement became a subject of ridicule and actor stopped acting in Indians films. He is currently residing in Auckland, New zealand with his family.

Now, in his interaction with Behindwoods youtube channel, Abbas opened on why he left India. The actor said that he could live with more freedom in a country like New zealand and pointed out that it lacks in a country like India. He also revealed that he worked in several fields including as an employee in petrol bunk, motor cycle mechanic, in constructions field etc.

“In a country like India, if a cinema artist is not getting opportunities, they do not see the reasoning behind it. But in New zealand, there is no judgment. After coming to New zealand I worked in a petrol bunk, I worked as a motor cycle mechanic and I enjoyed it. I also worked in a construction field. I used to go and do all the insulation” Abbas said. “In between that, I went to Australia and got myself certified as a public speaker.” he added.

Abbas said that he mainly want to do public speaking to the teenagers who are struggling with suicidal thoughts. “I myself had suicidal thoughts. And I changed my life. So I want to show them that they can also do it. Maybe if I can save at least one person, that is more meaningful and purposeful for me other than doing all these films for so many years” Abbas said.

“I chose New zealand because it could let me live with more freedom in doing my work and in getting into what I want to do. In India, we are still stuck in a materialistic world. We are always concerned about what other people are doing. I just want to leave all that and simplify my life. During my childhood, India was more simple and beautiful. We as people have complicated it. I came here to simplify my life for me and my family and to go back to the basic root system” he said in the video which is going viral in social media platforms.

For Radha Ravi's derogatory speech against actress Nayanthara, Social media erupted and came in for her support. Starting from Chinmayi who is a representative of...