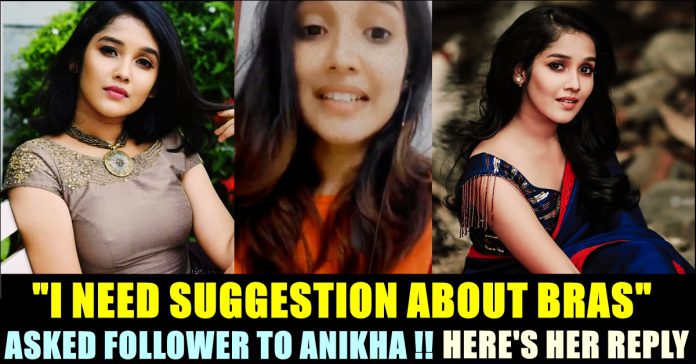 “This Is So Stupid” Anikha Replied To A Follower Who Questioned On Her “Survivors” Participation !! WATCH

Child artist Anikha Surendran who is known for acting in South Indian films, recently conducted a chat session with her Instagram followers and answered to many of their which included about her participation in the upcoming “Survivors” show which is going to be hosted by “Action King” Arjun. She also answered to a follower who asked her suggestions about “bras” and recommended a brand which makes “Pads” that she use. The actress also answered on the best compliment she received in her career.

Anikha Surendran who is known for sharing screen space with Ajith Kumar and Nayanthara in a number of films, recently turned 16 and is pretty much busy participating in photo shoots while signing films. She who is enjoying one million plus followers in Instagram, has uploaded 295 posts in the photo/video posting social media platform so far.

Anika is known among Tamil audience for her appearance in films like “Viswasam”, “Ennai Arinthaal” as Ajith kumar’s daughter. In “Naanum Rowdy Thaan”, she did the role of younger version of Nayanthara and acted as her daughter in a number of films including “Bhaskar The Rascal” in Malayalam. Most recently, she acted in “Queen” web series directed by Gautham Vasudev Menon as Late chief minister Jayalalithaa’s younger version. She recently performed in an advertisement along with Bollywood Superstar Amitabh Bhachchan as well.

Apart from garnering lakhs of likes in Instagram by uploading her pictures from photo shoots, Anikha is also known for interacting with her followers. On Wednesday, the actress who is enjoying 1.5 million followers in Instagram, asked her followers to shoot questions at her. Recently, a rumour did rounds saying that the teen actress is taking part of the upcoming Tamil “Survivor” show.

To a follower who asked whether she is taking part in the upcoming survivors show, Anikha replied saying “This has been absolutely. I am not part of survivor. I have never been . . This is so stupid” in a video. Watch the video below :

Another user wrote “Kinda awkward maybe but I need suggestion about bras””” what do you use Thank u” to which Anikha replied writing “I would suggest using cotton ones in right size but honestly they look terrible. And now I have been buying bras online now from sites like Zivame”

Here’s how the actress replied to the one who asked about the company of the pads she use.

She who is expected to play lead roles in the films that are going to be made in South India in near future, is already being compared with the looks of “Lady Superstar” Nayanthara. With her unique attires and International level makeovers, Anikha is competing with the top heroines of Indian film industry as far as her Instagram posts are concerned. On the work front, she is expected to appear with Vijay Sethupathi in “Maamanithan”.