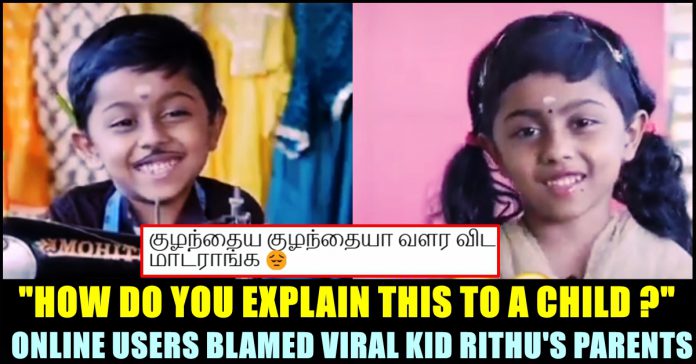 On seeing a video of seven year old viral kind Rithu who is making headlines for past few days, a set of people expressed their displeasure on how kids are being exploited by parents for virality. Rithu who is running a youtube channel named Rithu Rocks with 3.7 lakhs subscribers, has uploaded 8 videos so far with the help of his parents. A recent video of himself spoofing the news reporters of Indian media went viral among the Internet users and helped him get the national media attention.

Many nationally recognised media channels did a report on his recent videos. However, after watching one of his clips, few expressed their concern over how parents of this generation exploiting their children and ruining their childhood for money and fame. Rithu, rose to fame among the Internet audience after enacting all the roles in his short skits by himself. Be it a female character or elderly man, Rithu himself plays multiple roles with appropriate make-up which acts as his USP.

The kid started getting interviewed by top media channels and in one of the interviews he said that he wants to become an astronaut as he is interested in science. It was Rithu’s father Jothi Raj who started the Youtube Channel after identifying the acting and memorising ability of his son. He is currently partnered with Tamada media to create videos of his son and has been proudly expressing his happiness over his son’s success.

However, a particular video clip which shows Rithu as a Tailor, a female customer and an elderly customer left a number of social media users extremely disappointed. The video was made with a concept on the Tailor flirting with his female customer who comes to his shop to get her blouse stitched. He ignores an elderly customer who disturbs him while flirting with her and the video goes on to portray the tailor as a serial flirter.

The video is being widely shared in social media platforms with people lauding the acting skills of the kid who managed to perform all the three characters effortlessly with utmost perfection and cutest way of delivering dialogues. Watch the video below :

Irrespective of his performance, the video left a number of twitter users upset as they found the content inappropriate for a seven year old kid. “How do you explain this scene to a child, how do you teach them how to act and react in a scene like this? This is so wrong on so many levels, don’t even know where to start. Colossal parenting failure.” said a twitter user to express his disappointment whereas another one said “Sad and disturbing. This is how it all starts. There are millions of other topics for content if their focus is on the nurturing and promoting the skills of their child. This is what happens when the focus is on fame and popularity and not on the child.”

How do you explain this scene to a child, how do you teach them how to act and react in a scene like this? This is so wrong on so many levels, don’t even know where to start. Colossal parenting failure. https://t.co/FWzU5fSBxl

Yeah. Money and 15 minutes of fame scoring over parenting.

Exactly. Not just this , those dance shows, singing shows …picking up "age appropriate " stuff is out the door.
And tiktoks/reels 😭😭😭😭 https://t.co/BTb5K31zdh