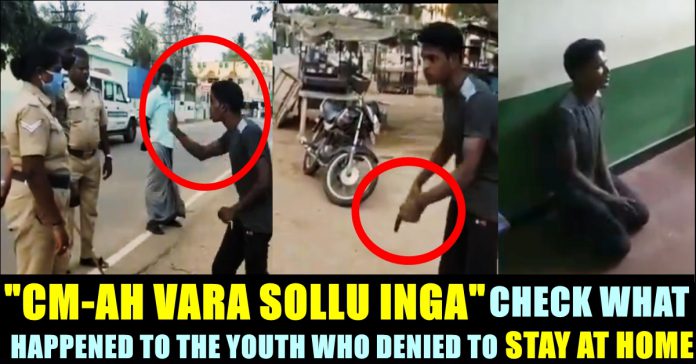 Video of a youth arguing with police officers who asked him not to roam around at this circumstance went viral in social media platforms. Now, a new video of him getting treatment in Police station for the way he behaved in front of police. Entire country is under lockdown till 14th of April due to the Corona crisis which is being faced by several countries across the world.

However, still people roaming in streets since the announcement. Several videos of them getting beaten by police across the country are surfacing in Internet constantly. One of a police officer in Tamil nadu was seen shedding tears in front of public to make them stop roaming. Now, a video of Tamilnadu youth arguing with police, is going viral across the Internet.

He says that his rights are being denied and demands the presence of chief minister Edappadi Pazhaniswamy in his place. “This is my fort. Ask him to come here and answer me. He comes here with folding hands for votes, right” he shouts at police officers with an animated body language. “If no one has the rights to come out of house, then you are also not required not to come out of house. You will also get infected by Corona” he says to the Police woman.

When she asks him to question about thatto chief minister, the guy says “Ask CM to come here. This is my place and my fort. He is coming with folded hands to get vote, right ? Ask him to come here” he says. “This is my rights. When my rights are denied, I will be forced to work as a slave in foreign countries” he says. “Why, When, Where, What ? If he has the answer. Ask him to come in front of me” he can be heard saying in the video.

As soon as the video went viral, a new video of the same guy getting beaten up police officers in police station surfaced. “You want Chief minister to come and show you the virus ? You can’t even understand that we are doing it for your good, huh?? Police and doctors are working day and night without considering their lives.” says a police officer while giving him a severe beating with a stick. “I will be safe, sir. Will wear mask and be safe hereafter” says the youth.

This youngster from a village in TN picked up an argument with the police for preventing free movement to curb COVID-19. He even wanted the Chief Minister to come & explain to him the logic behind such a move. Police took him to the station and taught him a lesson on Coronavirus. pic.twitter.com/j6QYGD79n3

What do you think on such ignorant youngsters who are still roaming around only to cause danger to the lives of others ?? Comment your views !!

Previous articleEntire Tamil Film Industry Mourns For The Demise Of Dr. Sethu !!
Next articleVijay Fan Mocked Malavika For Wearing Too Much Make-Up !! Check Her Reply