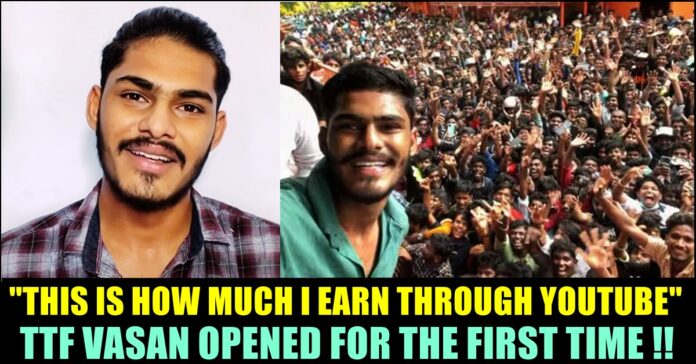 Youtuber Vasan who has been running a youtube channel titled Twin Throttles, is trending ever since celebrating his birthday with his 8000 plus followers. The 22 year old appeared in an interview with Thanthi news channel and shared about his journey as a youtuber. Talking about how he drove till Nepal and Ladakh, Vasan also revealed about his income from youtube in the interview and also shared about his future plans.

Two minutes of silence for those who don’t have a clue about this part of TN and beloved Vasan TTF Anna.#HappyBirthdayVasanTTF pic.twitter.com/wURZngHou5

TTF Vasan is running Twin Throttles, a youtube channel that has 2.75 million subscribers. The channel which has uploaded 634 videos so far, predominantly streams videos of Coimbatore based youngster named Vasan riding his bikes. In a recent interview with Thanthi channel, Vasan said that most of his youtube revenue are being spent for his bike alone as it is giving only 10 kilometre mileage.

“I haven’t shared about my salary anywhere and it couldn’t be shared as well. It will increase and decrease due to various aspects. If we post highest number of videos, the number will increase and if we post less number of videos, it will decrease” Vasan said. “I would post one video with one day interval. Revenue is pretty low. I will get Rs. 2 to 2.5 lakh per month” Vaasan said.

Vasan went on to share about his expenses for the salary he is receiving. “If we are buying a Super bike, the price of it is Rs. 11 lakh. For that, I have to borrow money from people who I know I person. There are many expenses such as Petrol, food, bike maintenance, requirements such as bike permit if we are riding bike to other states etc. My major problem is the mileage of my bike, it is giving just 10 kms, now you people would have found how my 2 lakh is being spent” Vasan said.

Mr. Local which was released a couple of days ago is a Tamil language romantic action comedy film written and directed by M. Rajesh. The...

Entire social media is flooded with the reactions for the ban of PUB-G mobile application. While some of them are supporting the movie of...

TV Star Sreenithi Opened About The Trauma She Went Through After Her “Valimai” Review!! WATCH

Television star and online influencer Sreenithi opened about what she went through after opining her views about Ajith kumar starrer "Valimai" to a YouTube...