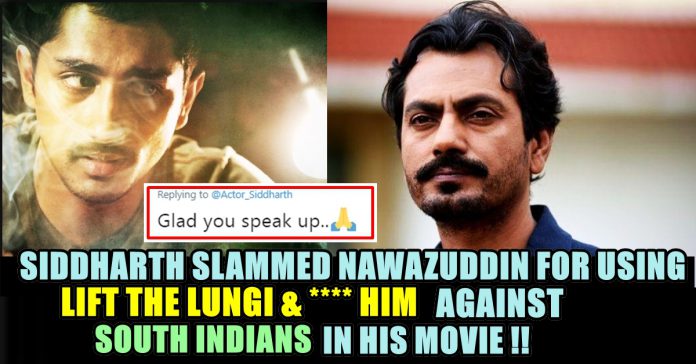 The trailer of Thackeray, based on the life of Shiv Sena founder, late Bal Thackeray, has stirred row over its controversial dialogues. Actor Siddharth has slammed the trailer for referring South Indians in a derogatory manner.

Shortly after the trailer released, Siddharth took to Twitter to express his displeasure and call out the “hate speech” in the movie.

He posted: “Nawazuddin has repeated ‘Uthao lungi bajao pungi’ (lift the lungi and *’#$ him) in the film #Thackeray. Clearly hate speech against South Indians… In a film glorifying the person who said it! Are you planning to make money out of this propaganda? Stop selling hate! Scary stuff!”

Nawazuddin has repeated ‘Uthao lungi bajao pungi’ (lift the lungi and *’#$ him) in the film #Thackeray. Clearly hate speech against South Indians… In a film glorifying the person who said it! Are you planning to make money out of this propaganda? Stop selling hate! Scary stuff!

In another tweet, he wrote: “Poetic justice is when a Muslim actor from UP gets to play the part of the revered Marathi bigot in a propaganda film.”

Poetic justice is when a Muslim actor from UP gets to play the part of the revered Marathi bigot in a propaganda film.

Quoting the link of the trailer, Siddharth also accused the film of selling “so much hate with such romance and heroism.”

The conveniently un-subtitled #Marathi trailer of #Thackeray. So much hate sold with such romance and heroism (Music, tiger roars, applause, jingoism). No solidarity shown to millions of South Indians and immigrants who make #Mumbai great. #HappyElections! https://t.co/F13jMcIRle

Here’s the response for his series of tweets :

Glad you speak up..🙏

It’s actually the truth, the speech is true. it happened, let the mature audience see it. Nobody can malign south, it stands in all its glory. There is enough hatred already on the street, those see this as an opportunity to spread hate will fail eventually.

Balasaheb did say such statements and staged protests against SouthIndians. Then why shouldn’t they show? Should they play safe like Hirani did in Sanju?
It’s a film at the end of the day. Just enjoy in theatres✌️

Hats off to u atlast someone raised the voice

@Actor_Siddharth its a biopic and nothing wrong in showing the real him. He was known to be controversial.. Let the world witness the real Mr. #Thackeray

Are you voicing against cinema world or politicians? Did you have any view on Sanju earlier? Looks you are unclear on what bothers you.

Absolutely Agreed With You,, Nowadays #HateSpeech Is The Best Way To Earn Money & Vote In India

finally someone spoke about it..more people need to speak about it

A couple of yrs back, @Nawazuddin_S had to give up a role in RamLeela as the local delhi @ShivSena gundas objected to the fact that he was a muslim and cudnt be seen on the stage depicting a hindu character out of Ramayan .. that’s icing on the irony cake ..

Politician Sanjay Raut, who has written the story of Thackeray, based on the life of Bal Thackeray, says that nobody can ban the film and that the CBFC, which has raised objections on the movie, will understand the vision of the Shiv Sena founder. During the trailer launch of the film on Wednesday, Raut told the media here, “We have projected Balasaheb exactly the way he lived his life, the way he expressed his opinions on his people and political situations. We did not fictionalise anything. Abhijit (Panse, director of the film) projected everything in a real manner in the film.”
Previous articleKL Rahul Said That He Is Happy For Mayank Agarwal !! Got Extremely Trolled !!
Next articleVideo Of Tim Paine Sledging Rohit From Behind The Stumps Going Viral !! Mumbai’s Reply Was Hilarious !!

After nearly 10 days of the incident happened, Super star Rajinikanth reacted to the Sathankulam lockup murder case by posting a tweet. Recently, a...

Ajith Acted In This Movie Of Him Without Belief !! WATCH !!

In a recent interview with director Chithra Lakshmanan, director Linguswamy has revealed that Ajith didn't like the idea of acting in his film "Ji"...