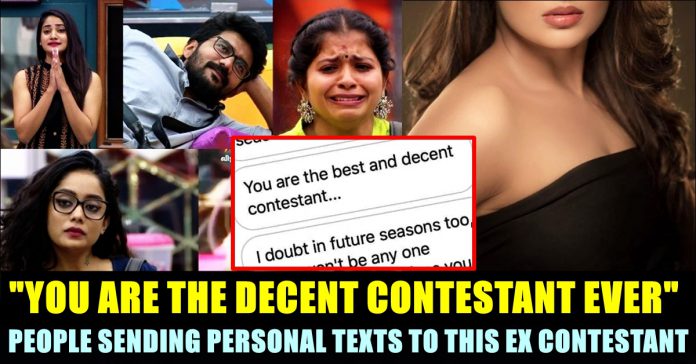 This Former Female BIGG BOSS Contestant Shared Screenshots Of The Messages She Is Receiving !! Check Out !!

The third season of Bigg Boss show Tamil is surely a hit, thanks to all the controversies. It doubled the number of followers as the previous season didn’t go well among Tamil audience comparing to the first season. Despite the increment of followers, Audience still couldn’t settle for a favourite due to their change of behaviour. Vanitha Vijayakumar who faced the wrath of public during her stint, got eliminated, made a comeback and won hearts of many viewers with her bold statements and with the way of approaching issues. She gained more support just few days before her eviction due to the freeze task in which she spent some lovable time with her adorable daughters.

To the contradict, many contestants who were loved by the viewers initially are now becoming the most hated contestants. Kavin and Losliya are the primary examples as people loved them as individuals. Meanwhile, on seeing this ongoing season, where people couldn’t find their personal favourite, they seem to have selected their all time favourite contestant of Tamil Bigg Boss show.

Actress Vijayalakshmi who entered house as a wild card entrant in the second season has uploaded a series of pictures in which we can see people pouring their love on her for being the best. It all started when that one particular fan sent her a message saying that she is the decent contestant of Bigg Boss. She said that it would be difficult to find a contestant like Vijayalakshmi in future as well. Viji, who got overwhelmed shared the screenshot by adding a caption saying “You made my day” in her Instagram story. Check out the screenshot here :

Followed by this story, many people who felt the same sent her the similar kind of messages it seems. Vijayalakshmi decided to share those screenshots, in a way of thanking them. Check out the pictures below :

Vijayalakshmi shared these screenshots with a caption saying “Overwhelming..! Lots of msgs! Loads of hearts! Cudnt screen shot everything. Thank you all my sweethearts. This means so much to me ♥️😊.. thanks for helping me stay fab. You r my drive ♥️ #verygoodmorning”

Overwhelming..! Lots of msgs! Loads of hearts! Cudnt screen shot everything. Thank you all my sweethearts. This means so much to me ♥️😊.. thanks for helping me stay fab. You r my drive ♥️ #verygoodmorning

Vijayalakshmi rose to fame among Tamil audience through her debut film Chennai 28 which was directed by Venkat Prabhu. She played the role of a love interest of Mirchi Shiva. She also played the female lead in Mysskin’s cop thriller “Anjathe”. Vijayalakshmi Feroz walked out of Nayagi serial to enter the Bigg Boss Tamil 2 house as a wild-card entrant.

Vijayalakshmi entered like a free-spirited girl, who was very active and energetic. She is quite straight-forward. She left her son Nilan with her husband Feroz and entered the house.

Do you also think Viji as best BB contestant ever ?? Comment your views below !!

Previous articleMaddy Won Hearts Of His Followers By Trolling Himself !! Check Out How !!
Next articleFan Page Trolled Mugen’s Girlfriend’s Looks !! Check How Abhirami Reacted To It !!

Virat Kohli led Royal Challengers Bangalore was comfortable at one point while chasing 141 runs scored by Sunrisers Hyderabad in Match 52 that took...