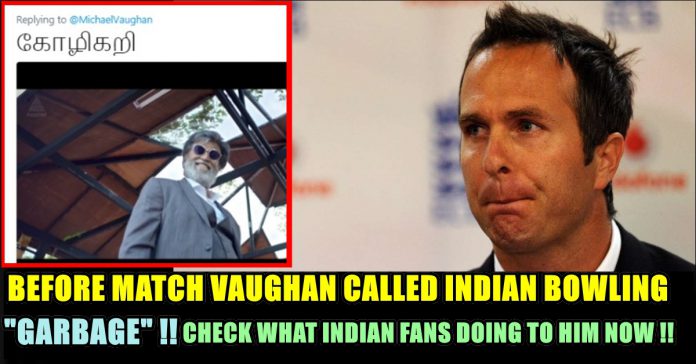 Former England captain Michael Vaughan found himself at the receiving end after criticising India’s bowling in the third Test at Trent Bridge. England found themselves in trouble after the visitors reduced them to 161 for 10 in the second session of the game on Day 2. The hosts had a good start by putting up 54 for the first wicket but then lost their way, thanks to some inspiring bowling from the Indian seamers. Earlier in the day, India resumed from their overnight score of 307 for 6 but were bowled out for 329 with the last four wickets falling for just six runs. James Anderson, Stuart Broad and Chris Woakes took three wickets apiece. Captain Virat Kohli top scored for India in the first innings with 97. Vice-captain Ajinkya Rahane scored 81. Vaughan, who was the captain of England the last time they lost a Test series to India in 2007, said in a tweet: “Lovely day for bowling as long as you bowl well …. So far India have bowled garbage …..”. He was immediately taken on by the Twitterati. One critic said in reply to Vaughan’s tweet: “Lol!!! garbage bowling took 6 wickets so far.” Vaughan then replied back to this tweet appreciating India’s comeback after the lunch, saying: “No garbage since Lunch …. outstanding display in this session!!!”

Lovely day for bowling as long as you bowl well …. So far India have bowled garbage ….. #ENGvIND

No garbage since Lunch …. outstanding display in this session!!! https://t.co/K0WFpggGpV

The former cricketer’s second tweet, however, saw more sympathisers than trolling with many viewing him as somebody who assesses games from an honest point of view. Our garbage bowling was enough to clean you guys up in just one session!!! 😂😂 #ENDvIND #ENGvsIND

Mr.Vaughan, if you want to criticise it’s right but the use of appropriate words must be done, it is really insulting on our part and it shows your character to respect others.

So how Ur defining England’s batting 😂😂

Also, just a reminder th English bowlers weren’t exactly brilliant in the first innings either! The bowlers who according to you are ‘garbage’ got your batsmen out for less than half of what your bowlers got out batsmen out on

I love you Michael but this tweet has not aged well 😂

So far English have luck.. but no more.. get ready bcz karma cycle is coming for you for your tweets🤣🤣🤣

As English batting line up looked like a dust bin today , Indian bowlers had bowled the garbage 😂

Previous articleIndia’s Youngest Billionaire Slammed By The People For Showcasing His Donation To Kerala !!
Next articleVideo Of Karnataka Minister Throwing Biscuits At Flood Affected People Going Viral !! People Slams For His Insensitive Behaviour !!