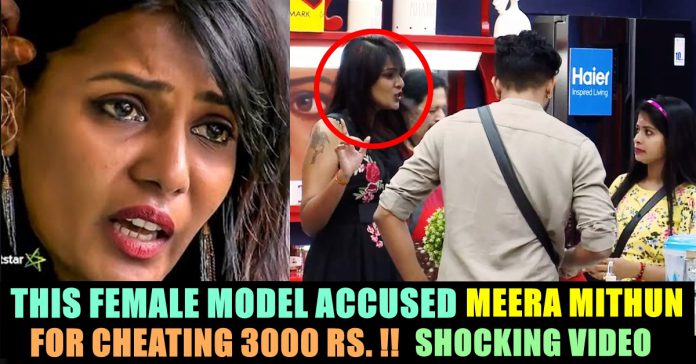 Recently, she made her entry into the BIGG BOSS Tamil season 3 as one of the contestant. As soon as she entered the house, many housemates expressed their mixed emotions.

Now a model named as Malarkodi, in an interview with Little Talks, revealed how she was cheated by Meera Mithun. Terming the Bigg Boss contestant as fraud, Malarkodi says that she threatened many people for money through phone calls and text messages.

“Meera Mithun could last in Bigg Boss house for 2 days maximum. She can’t fake herself for 24 hours a day. If she exposes her real face inside the house, the 15 other contestants will throw her out of the house like a ball.” says Malarkodi “TRP ratings which the channel requires is the only way for her to be in the house for more than 2 days” she added. While sharing her personal connection with Meera Mithun, Malarkodi revealed that Meera received money from her for an event she is going to conduct which was never happened. “She personally contacted me and requested me to participate in the event she is conducting. She also asked me to gather my friends for that show as well. She received 3,000 Rupees from me as registration fees. But the show never happened.” she said.

“Later I realized that Meera was in need of Rs.3000 because of which she cheated me. She also received 50, 000 from a designer and 35,000 to another designer. She also cheated a photographer who done work that worth 2 and half lakhs” Malarkodi added.

Earlier event manager Michael Joe accused the actress for the same reason. “The main reason of her participation in Bigg Boss is to erase the criminal records on her in order to transform as “Bigg Boss” Meera Mithun. Her real name is Tamil selvi and her Wikipedia page which had the informations about her criminal records is now edited.”

“If she sustains 100 days inside the house, then I would say that law is no more alive. She believes that Vijay tv would not let police to arrest her. But they would do it for TRP. even Kavin, Abhirami Venkatachalam, Sakshi Agarwal and that Srilankan model know about her.” said Joe in his interview.

Previous articleThis Controversial Actress Revealed That She Was Compelled By BIGG BOSS To Be A Participant !!
Next articleAmala Paul Removed From Vijay Sethupathi’s Next Movie !! Vishnu Got Angry !!