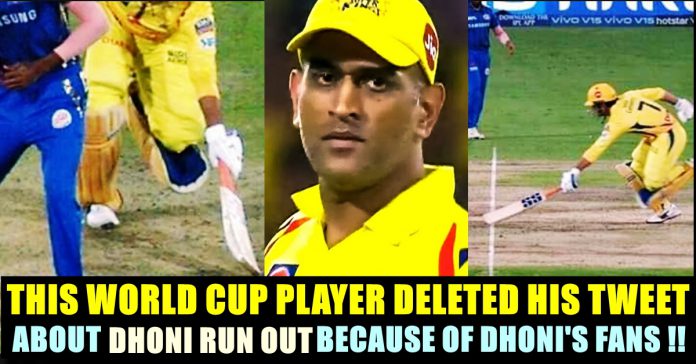 This Famous Cricketer Deleted His Tweet On Dhoni Run Out !! Check Out The Reason !!

If you ask a cricket fan about which match impressed him the most in the 2019 IPL tournament, without a second thought he would point out the finals between Chennai Super Kings and Mumbai Indians. The tournament which grabbed the attention from the fans for the most number of controversies, has no less entertainment in the finals as well.

Starting from Ashwin’s Mankad controversy, the tournament ended with Dhoni’s run out controversy. MS Dhoni, the Chennai Super Kings skipper, is the lifeline of his Indian Premier League (IPL) franchise. MS Dhoni was run-out in Sunday’s final against Mumbai Indians for two, leaving CSK in trouble at 82/4. CSK fans were hell-bent that the 37-year-old was not out, while there were many others who suggested otherwise. Since IPL is one of the most-watched T20 leagues in the world, the controversial run-out decision got a lot of reactions from all over the world. New Zealand cricketer Jimmy Neesham also gave his two cents by uploading an image from the match. “I love how passionate some fans are about our sport. I have huge respect for MS but how anyone could see the below photo and say it’s not out truly astounds me,” Neesham had written. Neesham is a part of New zealand’s World Cup playing squad. His tweet was immediately met with disagreement and the New Zealander was barraged with reactions from irked Indian fans.

Neesh, there are two sides to a coin mate. Your very same picture at the exact moment from another angle. Care to Google about optical illusion maybe? pic.twitter.com/e1NddbXV8A

That’s exactly why he is asking you to google. Grow up Jimmy 😜

Neesham, who faced continuous criticism for his comment decided to take down his tweet and reasoned two points on why he is deleting his tweet. His tweet about deleting the earlier tweet read as “I’ve deleted my tweet about MS Dhoni’s runout, not because I’ve changed my mind, but because: 1. I’m sick of seeing the same dumb comments in my feed 200 times a day. 2. I just don’t actually care. Please don’t bother tweeting me about it again. Have a good day everyone 👍”

I’ve deleted my tweet about MS Dhoni’s runout, not because I’ve changed my mind, but because:

Please don’t bother tweeting me about it again. Have a good day everyone 👍

Check out some of the reactions to his tweet here :

Spend your time on practice …. It would be better for you. And yes , also plan that how you can overcome from @msdhoni stumping…😉😉😉

It takes courage as a cricketer to take a position on an issue like this. Keep going 🙂

What do you think on his opinion ?? Comment your views below !!

Previous articleMan Arrested For Inserting Bike Handle Grip In His Wife’s Private Part !! HORRIFIC !!
Next articleFollower Trolled Vignesh Shivan For His Selfie !! You Must See How The Director Reacted !!

Tired Of Getting Fake News In Whatsapp ?? Here’s The Perfect Solution From The Whatsapp Itself !!

WhatsApp has launched its next weapon in the fight against misinformation on its platform in India: a tip line to which you can send...

Vikram Joined The 200 Cr Club In Just 4 Days !! Check How These Celebs Reacted