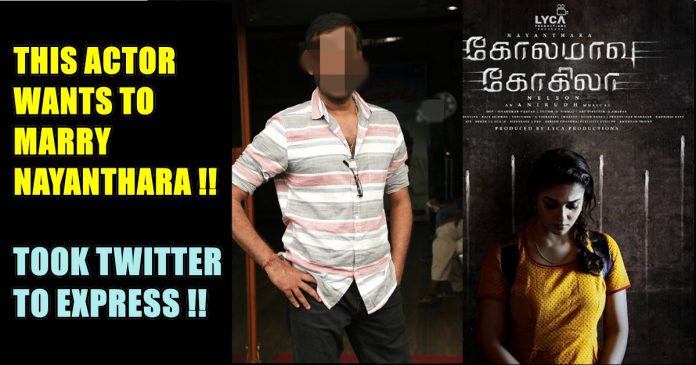 This Famous Actor Proposes Nayanthara In Twitter In a Cutest Way After Watching The “CoCo” Single !!

The makers of ‘Kolmaavu Kokila’ have released the second single titled, ‘Kalyaana Vayasu’ from the film. Composed by Anirudh Ravichander, the song has lyrics penned by none other than actor Sivakarthikeyan and is sung by Anirudh himself. Taking it to Twitter, Anirudh Ravichander shared the video song of ‘Kalyaana Vayasu’. Going by the video, the song seems to be a romantic number that revolves around Yogi Babu and Nayanthara. Apart from the music, the highlight of the song is the character played by Yogi Babu, who provides the comical relief. Notably, the first single ‘Edhuvariyo’ too received good response from the audience. Touted to be a female-centric thriller, ‘Kolamaavu Kokila’ will see Nayanthara playing a girl-next-door sort of a character after a long time. In fact, the film itself is reported to be revolving around Nayanthara and her family.
Produced by Lyca Productions, ’Kolamaavu Kokila’ is directed by Nelson Dhilipkumar and stars Saranya Ponvannan, Yogi Babu and Jacqueline in supporting roles. The film is expected to release this summer.
[wp_ad_camp_1]
Meanwhile Cinematographer turned Actor “Natty” Nataraj who is popular for his black comedy crime thriller “Sathuranga Vettai” took twitter to express his love towards “Kolamavu Kokila”.
He wrote “wish to marry only “Kolamaavu Kokila” or have to shake hands with whom she marrying” which indirectly denotes Nayanthara , directly the character “Kokila”. But he made sure that he is only denoting the character “Kokila” by wishing All the Best to Yogi Babu on marrying Nayanthara in the film. Check the tweet below,
[wp_ad_camp_1] Previous articleDinesh Karthik Responds To The Harsh Tweets Which Are Merely Thrashes Him : Watch Video !!
Next articleSHOCKING : Ravindra Jadeja’s Wife Brutally Thrashed By A Police Constable : Jadeja To Return Gujarat !!