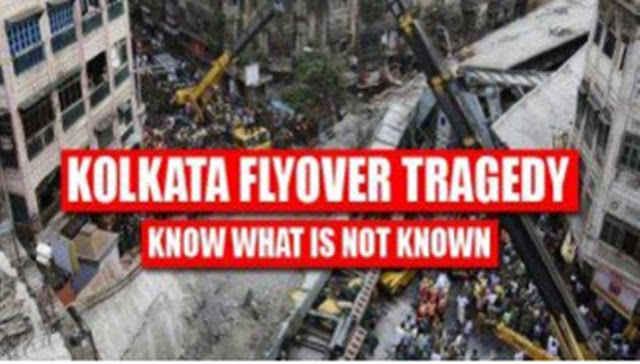 The Kolkata flyover tragedy has left us thinking about the shameful failure of our system and why a common man’s life has no value in our country. The sorrow of the citizens of Kolkata got transformed into anger when the company IVRCL which is responsible for the incident said that the incident was an “act of God”.
The official figures for the dead and injured are 24 and 89, respectively; however, a lady from Kolkata named Raisha Khandelwal has posted some facts about the incident on her Facebook wall and if we consider her post as truth, then the government is hiding a lot.
First of all, considering the congestion and traffic on the road, the number of dead and injured is too high than what is being reported by the government. Secondly, the government is covering up the incident by hiding photos of the vehicles that were crushed under the collapsed flyover. Raisha has posted some photos on her Facebook wall; do have a look and if these vehicles were full with public, the death count will easily surpass the government figure.
A lot has been written by Raisha and it should be read by everyone:
‪#‎KolkataFlyoverTragedy – KNOW WHAT IS NOT KNOWN
Please take time to read it entirely.
Post the avoidable mishap now what we see is the blame game. Truth is that both the previous as well as the current Government and along with them the construction company behind it are equally responsible for it. All three of them have been negligent in their respective responsibilities.
‘Negligence’ is what happens when you have extremely poor governance.
But when you have chosen a ‘sefish’ and ‘incapable’ government then this is what it follows :
They say that this tragedy has taken away 24 lifes and has injured 89. Seriously? Are you kidding me? Stop fooling the public who has elected you.
They have made all attempts to show reduced number of deaths in order to prevent damage to their already tarnished image. Also keeping in mind that the West Bengal Elections are nearby they don’t want more black spots to their term.
The actual number is way more then this.
I am a localite as well and have been living here since my birth. Im very well aware that it is a very busy road around 12:45 pm (when the collapse happened) any day.
Any bus passing this area is always very congested and full. Unfortunately their were buses as well which had fallen prey to the negligence. Now the Government tells us that they evacuated all the passengers out of the bus safely. I have reasons not to believe in it.
Look at the picture below of those two cars crushed in this mishap (picture 1).That can tell you the plight of the crushed buses. Just like those cars and buses there were several other vehicles like autos , rickshaws and pedestrians as well.
Since so many years I used to see some six to eight beggars sitting their everyday exactly in the accident spot. I’m not going to see them anymore. Are they even considered in the death count?
I saw the unbearable situation when it happened. I saw so many crying for help.
Victims were taken to several hospitals. Now comes the foul play. Many were later on shifted to medical colleges where they where made to lie in the passages. This was done to distort the counting of actual deaths and injured people. I wished media personnels would have questioned this move. I request media to explore beyond what is just shown to them prima facie. In several hospitals they were getting free medical services. Yet they were shifted.
Now questioning the viability of this entire project. Even before this mishap we all localites used to always wonder how did even such a project was sanctioned. There are several engineering glitches to this project. For example as seen in the picture below the flyover literary and actually enters into the balcony of a residential house (picture 2&3). Infact at several places one can actually step out of their houses into the flyover simply using their windows and vice versa (picture 4). Life made easy for thieves, isn’t it?
An accident on the flyover and their the vehicle gets an entry to your bedroom.
When localites objected ,they were assured that proper measures will be taken but then ofcourse nothing really ever happened.
Where should we go now? Should we just accept the unsafety caused to us?
Actions could have been taken earlier. Why do we always need a big tragedy to do the needed. Each time a compensation is announced to the victim. That is all? That gives back the happiness of the families who are probably going to live with a sorrow forever.
Coming to the construction company, IVRCL ( a blacklisted and a debt burdened company).
They say ‘ It is an Act of God’. Like seriously? Wish you guys had learned your shame and right ethics.
Shopkeepers nearby has reported that their were issues on that very day of mishap with the pillar. Workers actually had their reservations with the pillar not able to bear the overload. Shouldn’t they have worked with evacuating the area? Shouldn’t they have used some Caution boards?
That is how negligent the work was.
May be because that is how cheap the life of common people is considered these days.
All I hope and wish now is JUSTICE to these innocents and strong punishment for all those who are responsible.
Please share it as much as possible. Just liking it won’t help. We need to spread it.
Jai Hind.”
Below are the pics shared by Raisha Khandelwal on Facebook along with the post:
1

What do you think about Kolkata flyover tragedy? Do share your views in the comments section below.
Source