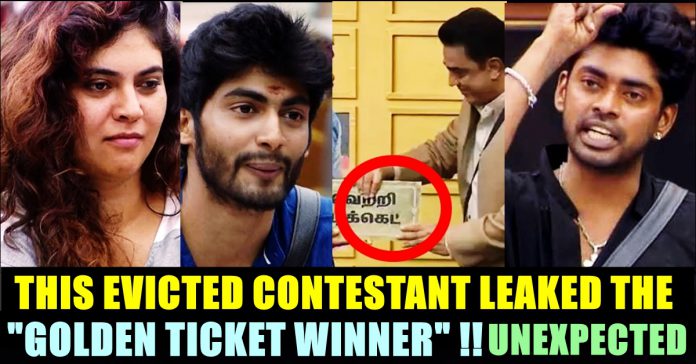 This Evicted BIGG BOSS Contestant Leaked The Golden Ticket Winner !! CHECK OUT WHO !!

Bigg Boss Tamil 3, the Ulaganayagan hosted reality show, is just a few days away from the grand finale. As the reality show is inching closer to the finale, the contestants are being tested by Bigg Boss in every possible way. The latest episodes of Bigg Boss Tamil 3 contains intense tasks yet competitive as housemates were given multiple tasks for the ‘ticket to finale’. The contestant who earns maximum points throughout the tasks will directly head to the finale week.

Throughout the week, the contestants are made to do tasks such as holding glasses in a wood by balancing it with leg, bursting balloons which are tied in both the legs of all the contestants, saving a golden egg from fellow contestants, cycling etc. As the winner would get into the finale directly, every contestants played it with determination which was evident in the way they played the game. Recently, the top three contestants on the Ticket To Finale points table – Mugen, Sandy and Sherin were called inside the confession room and were asked to share their thoughts on the task.

Today, Kamal Haasan is expected to reveal the winner Golden Ticket. However, evicted contestant Abhirami has revealed who won the golden ticket through one of her Instagram story. In the story she wrote, “Did I hear it right. Golden ticket to Golden heart Perfect. God is there” by mentioning the Instagram account of Mugen.

Since getting evicted from Bigg Boss house, Abhirami Venkatachalam is very much active on social media platforms, especially on Instagram. She has a separate fan base in Instagram where there are so many Instagram accounts which only runs to support her.

While being inside the house, She faced the wrath of social media which alleged that she is twisting Mugen rao and distracting him from playing the game. But now after her eviction, many fan pages started emerging and they are pouring love on her constantly which is evident through her Instagram stories.

She fell in love with Mugen Rao and expressed it to him and everyone in and outside the Bigg Boss house. Even after her eviction she kept sharing pictures of him and adored him for his natural behaviour. She even met his family and spent some valuable time with them.

In the second promo, Kamal questioned Kavin on why he got emotional only when Losliya got hurt during one of a task :

What do you think on Mugen winning the Golden Ticket ?? Comment your views below !!

RJ Balaji who made his debut as protagonist through the movie LKG earlier this year, is still doing commentary for cricket matches. His commentary...

Nithish Veera of "Vennila Kabadi Kuzhu", "Kaala", "Asuran" fame died after testing positive for COVID 19 virus. The news came in as a shock...