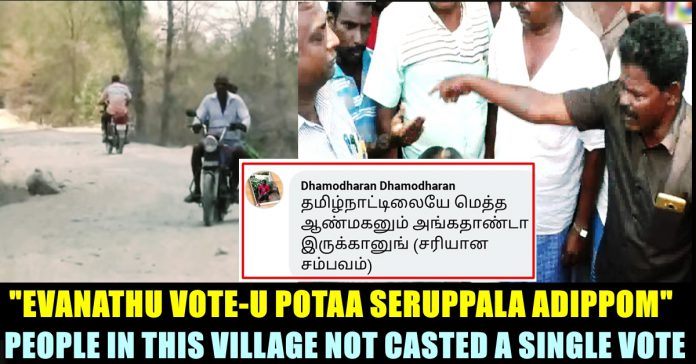 This Entire Tamilnadu Village Boycotted The Election To Show Their Anger On TN Government !! WATCH !!

A Village belong to Tamilnadu refused to vote in Lok Sabha election as it doesn’t have any basic facilities. Almost six crore voters supposed to be exercised their franchise in Tamil Nadu when the State votes for 38 Parliamentary constituencies and bypolls to 18 Assembly constituencies on Thursday.

It is essentially a fight between the AIADMK-led alliance which includes the BJP, PMK, and DMDK among others, and the Secular Democratic Front (SDF)-led DMK, along with the Congress, VCK, MDMK, and the Left parties. The Dhinakaran-led AMMK, Naam Thamilar Katchi, and actor-turned-politician Kamal Hassan’s MNM are also in the fray.

Sithalappakam, a small village next to Cheyyaru, Tiruvannamalai refused vote in the election, despite the request of Election officers. The main reason behind their anger is the poor road facility in their village. Among 410 votes, no single vote has been casted on the day of election.

“No bus facility, water facility or food facility provided for us. We are getting our rice for food from Arasanipalayam. Government never supplied anything to us which lead us to boycott this election” said a woman who residents there.

“We could not walk in night times and during rainy season it will be very hard for us to reach our houses. We are living in regret and it is getting worse day by day” said a man who is living there.

When election officers tried to convince the people to make them vote, one of the men in the video heard saying that there was no candidate came to ask vote. He said “No candidate visited us, what’s point in voting. We even don’t know who is our candidate” Another man near said “We will give slipper slaps if anyone in our village tries to vote”

This incident got lauded by the people of social media. They appreciated the people of village for standing for their rights together : Election officers who were waiting all day long went back with the machine after no one presented to vote. “Winning candidate forgets us after getting the votes from us. This is the reason why we are not willing to vote” says the people of the village.

This is really distressful to witness such an atmosphere in a village of a state which is said to be one of the highly improving as far as technology is concerned. And it also raised a question on what action do the government going to take to help these people.

An old Facebook post uploaded by lyricist Kabilan's daughter Thoorigai about suicide in the year 2020 got resurfaced in internet and is going viral....

Rithvika Accidentally Revealed That They Are Getting “Paid” By BIGG BOSS !! Caught On Video !!