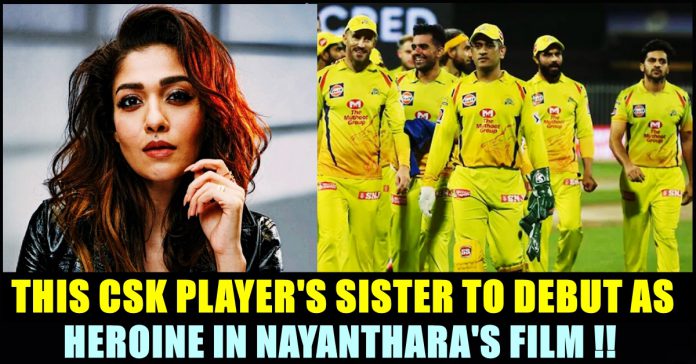 This CSK Player’s Sister To Debut As Heroine In Nayanthara’s Film !!

The production venture of Kollywood’s happening couple Vignesh Shivan and Nayanthara is a success as almost all the films that were made under their banner is a success. “Koozhangal” went one step ahead and has been selected as India’s representation for the Oscars. The duo recently announced about one of their next projects named “Oor Kuruvi” starring Kavin of Bigg Boss fame. Now, Rowdy Pictures of Vignesh Shivan and Nayanthara is going to launch Chennai Super Kings player Deepak Chahar’s sister Malti Chahar as a lead in a project named “Walking/Talking Strawberry Ice cream”.

Malti Chahar rose to fame after appearing in an IPL match that took place between Chennai Super Kings and Mumbai Indians as a viewer. Cameraman was time and again capturing the reactions of her who looked pretty animated after almost every delivery and she was of course supporting the yellow team as her brother is representing it. Her reactions have left the Indian social media people to go berserk as a lot of memes have also been created at that time.

Malti Chahar, a Miss India contestant, made quite the impact through her emotional reactions and enthusiastic cheers for Chennai Super Kings. What followed was a social media frenzy to figure out who she was and that has resulted in over six lakh followers. There were posts with Thala Dhoni and videos of her dancing with DJ Bravo. She also started syncing her lips with Tamil songs and scenes to attract the audience of Tamil nadu.

Now, after years of making headlines through her presence in MA Chidambaram stadium, the actress got an opportunity to act as lead in a Tamil film. Directed by debutant Vinayak, the film is reportedly going to have Krishnakumar of “Soorarai Pottru” fame as male lead. Revealing about herself making debut to Tamil film industry through the project of Nayanthara and Vignesh shivan, Malti Chahar, in her Instagram space, uploaded a post writing “I’m beyond excited to be a part of this contemporary cool film #WalkingTalkingStrawberryIcecream Written and Directed by @vinayakv_ and produced by #Nayanthara & Vignesh Shiven @wikkiofficial under their esteemed banner @therowdypictures. I’m sure it’s going to be fabulous! ❤️❤️”

Recognizing the same, Vignesh Shivan, through his twitter handle as “We are sooo happy to have you on board” to welcome Malti.

Check out some of the recent posts of Malti below :

Vanitha Vijayakumar, eldest daughter of veteran actor Vijayakumar is going to get married on 27th of this month with the presence of her close...